By: John
In: Government, Non Profit 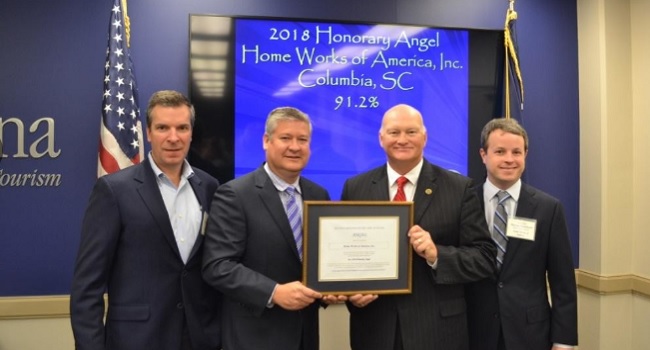 South Carolina Secretary of State Mark Hammond has announced the Angels of 2018. Ten Angels as well as one Honorary Angel were recognized at a press conference and honored with a reception in the Secretary of State’s Office.

Traditionally, charities have been eligible to be named as an Angel by the Secretary of State only once in order to recognize as many deserving organizations as possible. Last year, however, Secretary Hammond began the tradition of recognizing a past Angel that has continued to devote a high percentage of its expenditures to its charitable mission. Secretary Hammond designated Home Works of America, Inc., as this year’s Honorary Angel for its service to the people of South Carolina during the floods of 2015 and 2016. Home Works of America, Inc. was originally recognized as an Angel in 2004, and its program service percentage for FY 2016 was 91.2 percent.

In addition to recognizing ten Angels and one Honorary Angel, Secretary Hammond released the “2017-2018 Wise Giving & Professional Solicitor Report.” The report not only provides wise giving tips for donors, but also lists all professional solicitor contracts currently on file with the Secretary of State’s Office. The report also lists the percentages that were remitted to charities by professional solicitors based on joint financial reports filed in 2017.

“Although many good charities use professional fundraisers, we have seen over the years that most ‘Scrooge’ organizations have high fundraiser costs,” said Secretary Hammond. “For example, the professional solicitor Outreach Calling only remits 10 percent of gross receipts to the organizations it solicits for—so if you were to receive a solicitation from Outreach Calling and make a $20.00 donation, only $2.00 would go to the charitable organization. All but one of its current clients were previously named Scrooges. That is why it is so important that donors educate themselves and ask questions before giving away their hard-earned money. It is our hope that the “Wise Giving & Professional Solicitor Report” will give charitable donors the tools they need not only to give from the heart, but to also give smart.”

In addition to reviewing the “2017-2018 Wise Giving & Professional Solicitor Report,” charitable donors may research charities registered in South Carolina by visiting the Secretary of State’s website at www.sos.sc.gov. To review a charitable organization, select the “Charity Search” button to learn a charity’s total revenue, program expenses, total expenses, net assets, and fundraiser costs. The website even calculates the percentage of total expenses that the charity has devoted to its program services. You can also call our Division of Public Charities at 1-888-CHARITI (242-7484) for more information.