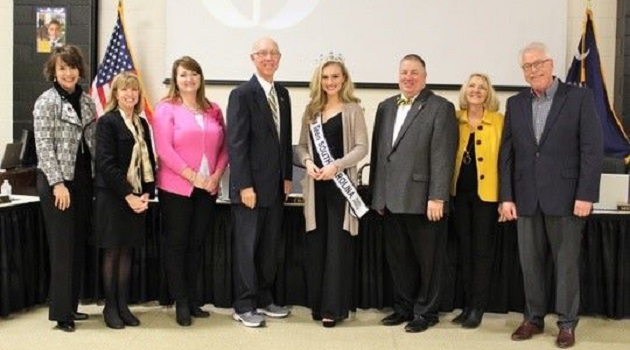 “I was shocked and very grateful as they called my name as the new South Carolina title holder,” Richter said. “I immediately thought about the constant support of my family and friends and the excitement rushed through me thinking about the many opportunities ahead of me to make a difference in my community and state.”

Richter said, “I am excited to represent South Carolina in the Miss Teen North America pageant and I know it will be an awesome experience for me because it is not only girls from the United States, but from Canada, Mexico and the Caribbean.”

Richter, a senior at Irmo High School, entered her first pageant through the Miss Yellow Jacket program at the end of her Junior year as a way to try something new, be more involved at the school and impact the community.

“It was such an honor serving as Miss Yellow Jacket this year and I had so much fun serving the Irmo community,” said Richter. “I was fortunate to give back to the school that has done so much for me, and that meant the world to me.”

As a member of Mock Trial, Richter credits her ability to handle the pressure of the pageant interview with her experiences competing on the team.

“To be successful in Mock Trial you have to be comfortable speaking in front of large groups of people so this has helped me a lot. Mock Trial involves a lot of thinking on your feet and this has significantly helped in pageant interviews,” Richter said.

Among her other commitments, Richter also serves as a student ambassador, member of Student Council and varsity swim team. After the opportunity to study abroad in the South of France last summer, she plans to study International Business and French in college upon graduating from Irmo High School this May.

“Lily embodies the Irmo student experience through her passion for service, academic achievement and ability to reach others through her thoughtfulness and grace shown to others. I am so proud and excited for what her future has to offer,” said Dr. Robin Hardy, principal of Irmo High School.