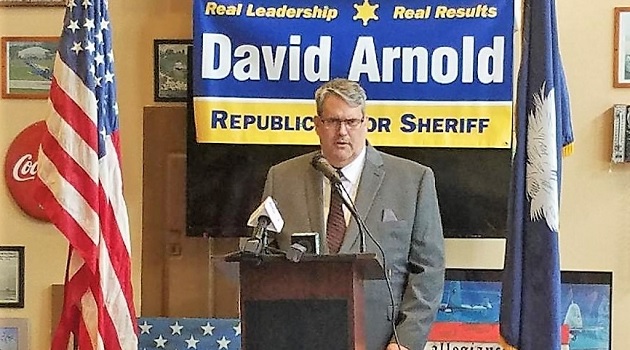 A veteran with more than 30 years in law enforcement, Arnold announced his candidacy in front of a group of supporters at the Flight Deck Restaurant in Lexington.

“There is one year to go before the Republican Primary, but I’ve already been speaking with hundreds of residents who tell me that they want a more proactive Sheriff’s Department that produces real results,” said Arnold.

Arnold said his top priorities as Sheriff would be to work to restore high performance and ethical standards, increase Deputy response times, make more efficient use of tax dollars, protect seniors from scams and fraud, and impose a tougher crack down on illegal drugs in the county.

“We must ensure that every deputy has the training, materials, and support from department leadership they need to do the job,” said Arnold. “Our residents and businesses in Lexington County must feel safer while knowing that their Sheriff is working tirelessly to protect them.”

Arnold, a lifelong Republican, will run in the Republican Primary next June. He said that he is a Republican guided by conservative values and principles. He believes in individual liberty and is a strong supporter of the Second Amendment.

Citizens can find out more at www.arnoldforsheriff.com.