Massage therapist gets to hearts by volunteering 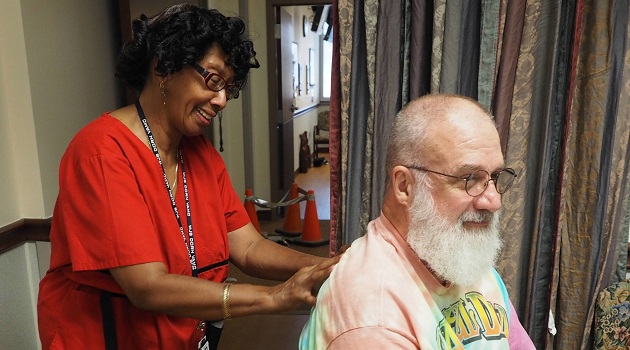 One can see the change in military Veteran James Davis, a patient in the Community Living Center (CLC) of the Columbia VA Health Care System, as Army Veteran Terry Smith, a licensed massage therapist, begins to massage muscles around his neck and shoulders.

Smith is known around the Columbia VAHCS as the massage therapist with the healing hands.

As a licensed massage therapist, Smith takes her profession to heart by volunteering hours at the medical center for Veterans who need a bit of stimuli, which she provides through her simple form of touch.

“It’s amazing what that sense of touch can do for a person, especially when they don’t get to experience it much anymore,” Smith said.

Cases in point: One Veteran in the CLC, a diagnosed Alzheimer’s patient, kept his hands tightly clenched. Through the massage touch offered by Smith, this patient eventually began to slowly release his fingers as she began to massage his hands and wrists. Another Veteran in the CLC would pretend to be sleeping in his wheelchair. As Smith began to massage his shoulders, arms and hands, the patient would begin to wake up, and say that he thought he was dreaming about the touch.

Originally from Mount Vernon, New York, Smith joined the military to travel and see the world. As with many in her military peer group, she became a Desert Storm Veteran. Eventually, she found a career path as a medic in nutritional care at West Point.

“Even though I am from New York, I had no clue about West Point or any other type of military posts or bases that were in my state,” Smith said. “Plus, not knowing a lot about the military before I enlisted made each assignment that I had a new experience for me.”

Once her service in the Army was complete, Smith did various jobs working with Wachovia Bank, Verizon, SCE&G and security. She also devoted 15 years as a personal nanny for a prestigious family in the Columbia area.

But Smith knew she wanted to give back in some way to the Veterans in the form of volunteering. Her desire was to do something that would have direct contact with those who had served.

As she was trying to plan her next chapter in life, she decided to take her GI Bill and apply it to the field of massage therapy. In 2012, when her schooling and licensure was complete, she knew she had found her calling.

“I love what I do,” Smith said. “This is the type of treatment that gets to the heart of the person. Everybody is not good at muscle massage. Some people think they are doing something helpful in a rub down, but all they may be doing is massaging a bone, which is something you don’t want to do. I can oftentimes feel the stiffness in their muscles when I begin my massage, and it is my goal to work it out.”

As she works to maneuver the pain and stiffness away from the Veterans, they often open up to her and share their war stories. When she arrives for her healing touch therapy on the first and third Wednesday’s of the month, many eagerly await their turn for her hands-on contact.

“She is the only volunteer massage therapist we have here,” Jett said. “The patients really appreciate what she does, and the word is spreading. Even those Veteran patients here who don’t participate in other therapeutic events, eagerly await the day and time of Smith’s arrival to get a massage.”

As part of a network of licensed therapists who also have their own practice, Smith needs her own muscles reinvigorated from time to time.

“We swap and work with each other. So, a therapist may give me a massage, and I will do likewise for them. We all need that recharge to keep us going,” Smith said.

When not at her business, Tranquil Lion Care, she enjoys spending time with her adult sons, James and John Whitley. She also finds enjoyment in learning belly dancing, African dance, and the roller coaster rides at Carowinds.

When asked what makes her massages so very special for the Veterans, Smith said, “I touch them with the spirit of love.”