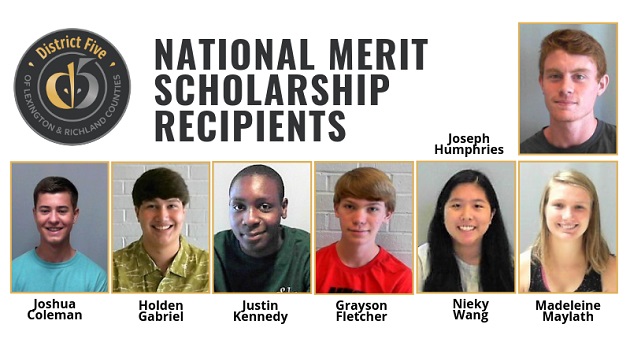 In June, Joshua Coleman (Dutch Fork High, Clemson University), Justin Kennedy (Dutch Fork High, University of South Carolina), and Holden Gabriel (Chapin High, Clemson University), were also named winners of this year’s National Merit Scholarships as part of the first group of college-sponsored Merit Scholarship awards.
Officials of each sponsor college selected their scholarship winners from among the Finalists in the National Merit Scholarship Program who will attend their institution. College-sponsored awards provide between $500 and $2,000 annually for up to four years of undergraduate study at the institution financing the scholarship.

To compete for Merit Scholarship awards, Semifinalists first had to advance to the Finalist level of the competition by fulfilling additional requirements. Each Semifinalist was asked to submit a detailed scholarship application, which included writing an essay and providing information about extracurricular activities, awards, and leadership positions. Semifinalists also had to have an outstanding academic record, be endorsed and recommended by a high school official, and earn SAT® scores that confirmed the qualifying test performance.
This final group of winners brings the number of 2019 National Merit Scholars to more than 7,600. These distinguished high school graduates will receive scholarships for undergraduate study worth a total of over $31 million. In addition to college-sponsored awards, two other types of National Merit Scholarships were offered—2,500 National Merit $2500 Scholarships, for which all Finalists competed, and more than 1,000 corporate-sponsored Merit Scholarship awards for Finalists who met criteria specified by their grantor organizations.

“Our district, schools, community and parents should be extremely proud of this national recognition of these exceptionally talented students who have worked extremely hard to achieve academic excellence,” School District Five Director of Secondary Education Alvin Pressley said. “These students are our nation’s best and brightest! We should all be proud of their accomplishments and wish them the best as they transition to their next challenge representing their schools and community with continuous academic success.”

This year’s National Merit Scholarship Program began in October 2017 when over 1.6 million juniors in more than 22,000 high schools took the Preliminary SAT/National Merit Scholarship Qualifying Test (PSAT/NMSQT), which served as an initial screen of program entrants. The highest-scoring participants in each state, representing less than one percent of the nation’s high school seniors, were named Semifinalists.