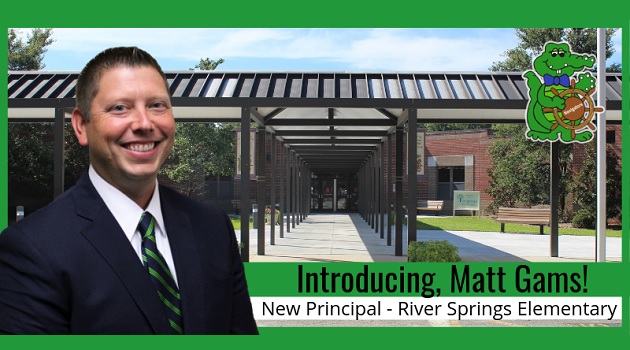 Gams was previously assistant principal at River Springs Elementary, where he served for six years. He also served as an assistant principal at Nursery Road Elementary for two years prior to River Springs Elementary. Last year, he successfully renewed his National Board Certification in the area of Literacy: Reading Language Arts/Early and Middle Childhood. He replaces Melanie Cohen, who was named the district’s Coordinator of Personnel in July.

Staff and members of the public are invited to a Meet and Greet drop-in event for Gams on Wednesday, August 7 at 2:00 pm at River Springs Elementary School (media center).

“I am excited and energized to be the new principal of River Springs Elementary School,” Gams said. “I am looking forward to continuing the positive culture at River Springs. We have such a supportive community, students eager to learn, and empowered and experienced teachers. Together we are going to continue to grow and learn as we work together to build the future.”

Gams has been an educator for sixteen years, starting his career in Richland School District One as a third-grade teacher at Sandel Elementary School. He came to School District Five in 2004. He earned his bachelor’s degree in education from Mansfield University of Pennsylvania. Gams also earned his master’s of science in administration from Capella University in 2009.

“When we look at Mr. Gams’ body of work and experience, we know he is someone who embodies the idea of intention and positive impact,” School District Five Superintendent Dr. Christina Melton said. “He has a proven record of success and a true passion for serving students and staff. We’re excited to have him continue his service to River Springs Elementary, now as principal. Congratulations to Mr. Gams.”