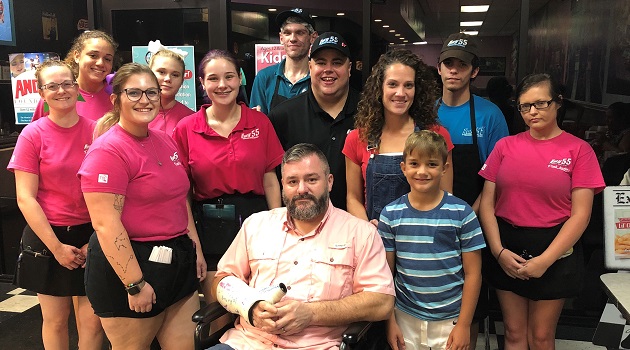 The event raised more than $3,000 for the injured officer through 100 percent of its sales that evening going toward the fund, as well as contributions from customers and tips and hourly pay donations from restaurant staff members.

“I think every deputy that was on shift or remotely thought about working that day came in to eat and support him,” said franchise owner Jay Webb. “Just seeing the outpouring of love from the community toward Deputy Hall left our young employees emotional and left me emotional.”

What made this fundraiser unique was the personal relationship Hall had with the restaurant, its owner and staff members. Hall and his family have been regular guests at Hwy 55 since the restaurant opened in 2012 and they became friends with franchise owner Jay Webb and many of the cooks and servers. The entire Hall family attended the event on July 29. Hall and his wife Brittany have four young children – eight-year-old twins, a seven-year old and a six-year old.

Deputy Hall was on his way to work in early June when he was struck by a drunk driver. His pelvis was shattered, his femur was forced into his intestines and his muscles released toxins that affected his organ function. Hall spent 45 nights in the hospital during his recovery.

“It was important for the entire Hwy 55 staff and our customers to be able to help out a Lexington family that we all know so well during their time of need,” said Webb. “The response in assisting Deputy Hall and his family has been tremendous. It is another way in which we try to show our ‘Love Your Neighbor’ company philosophy. We are proud to play a small part in helping the Hall family through this difficult time.”

On August 3, Hwy 55 hosted Brittany and her children for lunch at the restaurant, when they also presented them with a check for the money raised during the week.