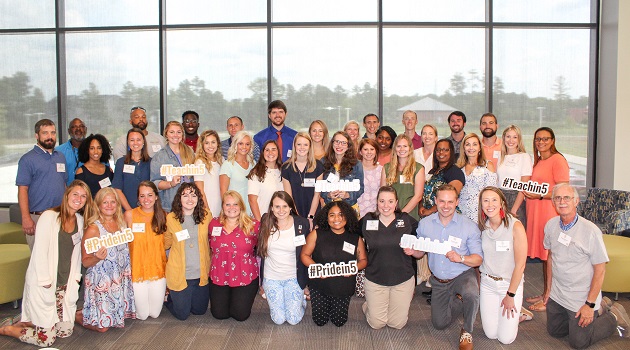 Lexington-Richland School District Five welcomed its first-year teachers to the district on August 12, showering the new educators with school supplies, books and support.

The First in Five Teacher Shower event was the idea of a committee of district staff and current teachers who wanted to celebrate the district’s new first-year teachers while also welcoming them to School District Five and getting them prepared to start the new school year.  August 13 was the first day back for teachers in the district.  Students return August 21.

“It was important for us to host this event because we have been very fortunate to recruit some of the best and brightest first year educators,” said School District Five Director of Personnel Tamara Turner.  “One of the challenges educators face coming into the classroom is actually supplying their classroom with the needs of their students.  This was a wonderful opportunity for us to collaborate among the district to get items they need to make their classrooms a warm and comfortable learning environment to welcome students.”

School District Five’s First in Five initative provides support to new teachers throughout the school year, including professional development and mentoring.  During the August 12 teacher shower, the new educators were provided with classroom supplies and gifts and played games with other first-year teachers and their mentors. They also were able to meet and mingle with School District Five instruction content coordinators and shop for school supplies in the “Shop Til’ You Drop” store.  All the items in the store were donated by current or retired School District Five employees as well as the District Five Foundation and various businesses.  Data shows that the first few years of a teacher’s career are critical to retention.

First year teacher Kirsten Feldner is no stranger to School District Five because she graduated from the district, completed her student teaching in the district and now will be teaching fifth grade at H. E. Corley Elementary School Leadership and Montessori Magnet.

“I think that School District Five is doing a phenomenal job to prepare first year teachers not only with the things we need, but also emotionally,” Feldner said.  “I feel like I have support not only at my school but also in other schools throughout the district.”

Tamara Turner added, “As a part of the event’s agenda, we were able to introduce the new teachers to some of the important key players that will support them during the year as well as provide them with gifts they requested.  It was truly a shower based on their wants and needs.”

The shower was the inaugural First in Five event, but School District Five Superintendent Dr. Christina Melton said it will not be the last.