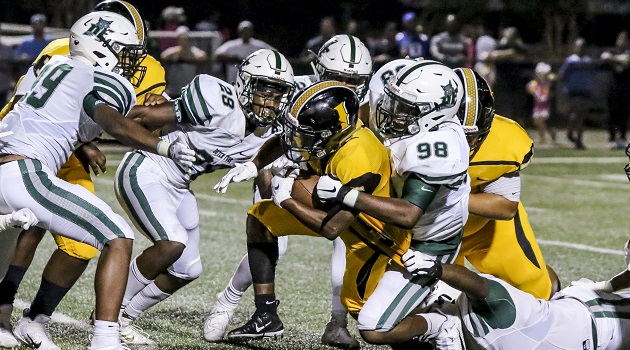 After Dutch Fork’s non-region victory against Irmo last week in the two teams’ only matchup of the season, they both move forward now against other non-region opponents outside District Five with only one exception: Silver Foxes at Chapin Eagles October 4 to start the Region 5-5A games.

Dutch Fork and Chapin remained undefeated after last week’s games, with the Silver Foxes at 2-0-1 after the season opening tie with Mallard Creek, and Chapin at 2-0 after starting the season in Week 1 — not Week 0 as did Dutch Fork and Irmo — and then earning victories against Mid-Carolina and Lugoff-Elgin.

Irmo stands at 1-2 after a win against W. J. Keenan and losses to Lexington and Dutch Fork. Each team will play a total of 10 regular season games, including those in region competition.

At Irmo last week, the three-time defending 5A state champion Silver Foxes — who hold four state titles when including the 2013-14 title as a Class 4A contender — dominated the scoreboard by scoring two or more times in each quarter except the third, which was scoreless for both teams.

It was 35-0, Dutch Fork, at halftime and going into the fourth period, and — with two touchdowns (TD) and two failed point-after attempts (PAT) for the Foxes, as well as a TD and a good PAT for the Yellow Jackets — it closed at 47-7, Dutch Fork’s advantage.

After two road games, Dutch Fork will be at home Friday at 7:30 pm to play host to Boiling Springs, and Irmo will have its third straight home game when Brookland-Cayce visits W. C. Hawkins Stadium, also Friday at 7:30 pm.

Chapin remained undefeated early in the season last week when the Eagles defeated Lugoff-Elgin 32-28 in a close one at home. The Eagles will travel to Newberry Friday for a 7:30 pm game with the Bulldogs, and then play at home again next week when the Spring Valley Vikings visit for the Eagles’ Homecoming Game.