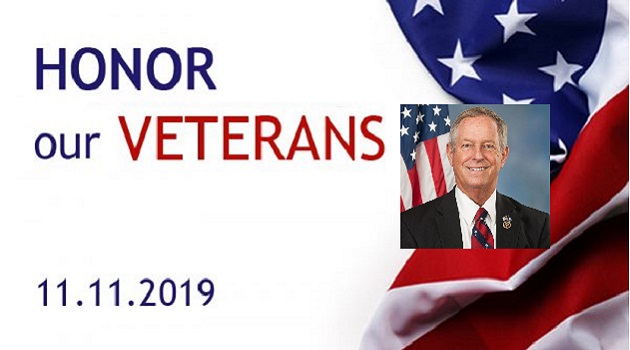 This Veterans Day is an opportunity to recognize the men and women who sacrifice so much for our freedom. The recent operation in Syria to capture the murderous leader of ISIS shows the continued resolve our servicemembers have when protecting this country. We must honor these sacrifices, although this is a debt that cannot be repaid. While representing South Carolina’s Second District in Congress, I will continue fighting to promote efforts that help and protect America’s veterans.

This Congress, I co-sponsored important legislation to support our veterans and their families. This includes the VA Hiring Enhancement Act, which enforces federal law that already establishes minimum requirements for VA physicians and the Homeless Veterans Families Act, which increases money for services to homeless veterans including money for minor dependents. American veterans deserve our support and I am grateful to fight for them. I also co-sponsored the Improve Well-Being for Veterans Act that required the Secretary of Veterans Affairs to provide financial assistance in support of veteran suicide prevention services. Additionally, I am supportive of efforts to cut red tape for military spouses when transferring professional licensing between states due to required moves.

I recently met with representatives from the Veterans of Foreign Wars of South Carolina during their September visit. We know we must do better to combat veteran suicide and I am committed to working with the Veterans Administration to ensure access to care. This is a frightening trend and I urge my fellow South Carolinians to reach this Veteran’s Day to any veteran experiencing hardship.

My team was honored to host Veteran’s Hiring Fairs for four consecutive years. We are seeing the dividends of those efforts now in a strong economy and a decrease in veterans unemployment rate. The South Carolina Department of Employment and Workforce cited data showing “the state’s annual unemployment rate for veterans declined to 3.3 percent in 2018, down from 3.9 percent in 2017. This is a 15.4 percent drop in the rate year-over-year, and a considerable decrease from the 5 percent unemployment rate in 2016.” This is good news for our veterans, our economy, and our state. Thank you to our small businesses and industry partners who value the work ethic of our veterans.

I am grateful to be named as a Conferee for the 2020 National Defense Authorization Act (NDAA) where House and Senate members will adjudicate their respective National Defense Authorization Acts to send to the President. I will continue to fight for inclusion of the “Widow’s Tax” reform in the final bill; I am determined for the surviving spouses to receive the benefits they deserve – either through the NDAA or with a stand-alone vote on The Military Surviving Spouses Equity Act. I first introduced this Act to repeal the “Widow’s Tax” in 2011. Since then, my team partnered with Veterans Service Organizations and advocates who dedicate countless hours to fight for repeal of this unfair offset.

I am grateful that my office is participating in the Veterans History Project, an ongoing effort by the Library of Congress to collect and preserve personal accounts of American war veterans. These narratives keep history alive and allow these important experiences to be accessible for future generations to know first-hand of wartime realities. If you or someone you know is interested in participating, please reach out to our office. I also want to highlight the work of Kassy Alia of Serve & Connect and our first responders. Many veterans return to service as a first responder after separating from the military.

As your member of congress, as a veteran, and as a father of four sons who have served in the South Carolina Army National Guard and the Navy overseas, I will continue to fight for and support our nation’s veterans and their families.