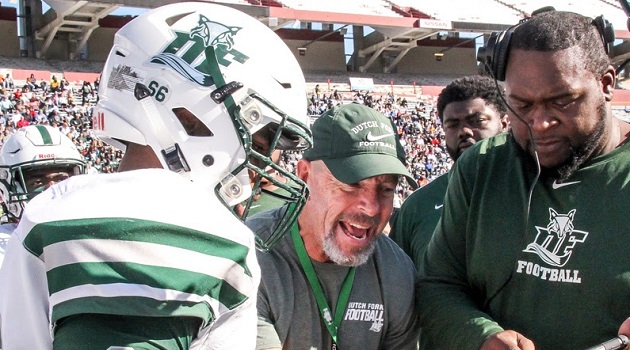 “I am proud to be named National Coach of the Year,” Knotts said.  “I am grateful to many people – my family, the administrators I have worked for, the coaches who have worked with me, and the many players that I have had the honor to coach. This award could not be earned without the efforts, support and assistance of all the above – this is truly a team award. I am truly blessed to be part of this great game of football and privileged to have earned the title of Coach.”

Knott’s Silver Foxes took down Dorman 34-31 in overtime to clinch the 5A State Championship December 7, 2019 at Williams-Brice Stadium. Since the South Carolina High School League expanded to five classifications in 2016, Dutch Fork is the only team to win the championship in the state’s biggest division. The Silver Foxes have now played 40 straight games without a loss.

“We are extremely pleased to honor Tom Knotts,” said Eric Hess, Executive Director of the NHSCA. “Coach Knotts has established Dutch Fork as one of the top programs in the nation during his tenure as the head coach.  He exhibits a strong dedication to supporting and developing his high school student-athletes both on-and-off the football field.”

The state title is the fifth title Dutch Fork High School has earned.  Knotts has won 12 championships combined in North and South Carolina.

Dutch Fork High School principal Dr. Gerald Gary said, “What a well-deserved honor for Coach Knotts and his family. He continues to rewrite the record books at Dutch Fork High, as well as in our state.  We could not be more excited for him.”