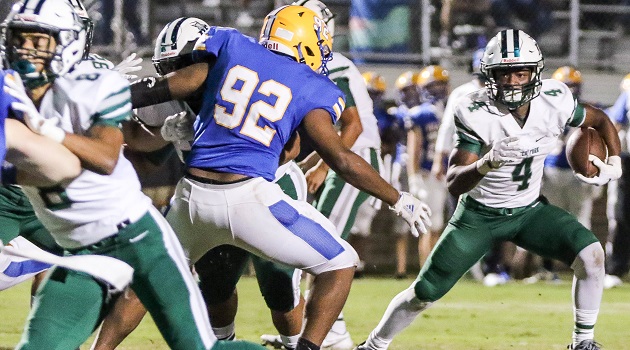 With Dutch Fork’s 55-13 varsity football win at Lexington last week, the Silver Foxes completed their Region 5-5A schedule at 4-0 and now look outside the conference for opponents to finish the abbreviated 2020-2021 season.

They found one. Spring Valley’s Vikings are to visit Dutch Fork Friday at 7:30 pm for the Foxes’ first non-conference game of the season. And they have just one more after this one.

Spring Valley is currently at No. 4 in Region 4-5A and coming off of a loss to Blythewood last week. The Vikings will be looking for their second win this season.

Against Lexington last week, Dutch Fork held a 28-0 lead at halftime with two touchdowns (TD) in the first quarter and two in the second. The Silver Foxes scored another 21 points in the third quarter and 6 in the fourth to amass their final 55 points.

The Wildcats put up 6 points in the third quarter and 7 in the fourth to record their 13 points.

Next week Dutch Fork is to wrap-up its regular-season schedule with a non-region matchup on October 30 against the South Pointe Stallions at Rock Hill.

The Silver Foxes are working this season to play for another state championship title, and they will have the chance to take that quest to the next phase in a couple of weeks.

With the Class 5A playoffs starting November 13, Dutch Fork will begin working its way through the single-elimination brackets in an effort to take the season all the way to the state finals again — and win it again.