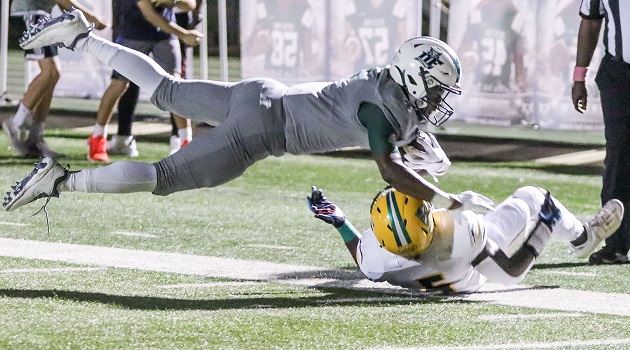 With their varsity football region games completed and the Region 5-5A title secured two weeks ago, the Dutch Fork Silver Foxes added a 21-0 non-region win against Spring Valley last week, and they have just one more game to play in the regular season.

The Foxes will travel to Rock Hill on Friday to take on the South Pointe Stallions at 7:30 pm to complete the regular season, leaving about two weeks to prepare for the November 13 start of the playoffs.

Against Spring Valley last week, Dutch Fork scored its fewest number of points this season, but held the Vikings to zero points. By statistics, according to maxpreps.com, the game was balanced in some major categories.

Both teams ran 50 plays during the game, with the Silver Foxes in possession of the ball for 24:06 minutes, and Spring Valley controlling the ball for 23:54 minutes. Dutch Fork earned 21 first downs, while Spring Valley was held to 10, and the Foxes were penalized eight times for 101 yards to the Vikings’ nine penalties for 92 yards.

The major difference was, of course, how many times each team crossed the goal line: Dutch Fork 3, Spring Valley 0.

Junior Antonio Williams threw only one pass, but connected on that one for the only aerial touchdown (TD) of the game, and he was on the receiving end of seven passes for 128 yards, and added 22 rushing yards toward Dutch Fork’s 140 total.

And while sophomore Jarvis Green did loose a fumble, he also added two TD’s with 87 yards rushing on 16 carries plus another 15 yards with three pass receptions.
And, although senior quarterback Will Taylor did not connect on any touchdown passes, he did complete 17 of 22 attempts for 218 yards with only one interception to lead the team in yards gained.

Here’s a clue to the Vikings’ zero points for the game. Junior CJ Wicker recorded four sacks, while junior Nicholas Wright and senior Rodney Shell had three, each, for a team total of ten.