By: John
In: Non Profit 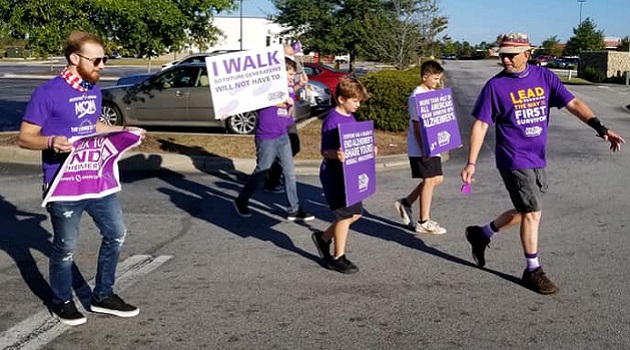 The Alzheimer’s Association Walk to End Alzheimer’s looked different this year as a result of the COVID-19 pandemic. Instead of hosting a large in-person gathering in Columbia, participants walked as individuals or in small groups on sidewalks, tracks and trails wherever they chose in the community October 24.

“Alzheimer’s is not taking a hiatus during COVID-19, and neither can we,” said Cindy Alewine, President of the Alzheimer’s Association, South Carolina Chapter. “This year, more than ever, we need the support of our community to serve all those affected by Alzheimer’s and other dementia.”

With the different format of Walk to End Alzheimer’s, it’s easier than ever to get involved, even after walk day. Participants may still walk whenever and wherever they choose, stream the opening ceremony online on-demand, and access an interactive virtual route through the free Walk to End Alzheimer’s App. Learn more or donate at alz.org/walk.

For 47-year-old Missy Callahan of Lexington, her fight to end Alzheimer’s is every day. She was diagnosed with Younger-Onset Alzheimer’s at just 45 years old after noticing changes in her day-to-day life.

“I started getting lost going home from work, just 4 miles away. I made excuses. I was tired or I had a long day,” said Callahan. “I had to write things down. One day I walked into my office and there were post-it notes everywhere. I knew something wasn’t right.”
Callahan eventually decided that she had to leave the job she loved in the car finance industry in Orangeburg.

“I have no concept of numbers anymore. It’s not easy. It’s a horrendous thing to face, but like anything else, it’s all in how you approach it.”
C

allahan is fighting back by participating in Walk to End Alzheimer’s. She walked with a team of friends in the Red Bank area, and she continues to raise funds to advance research, care and support through the Alzheimer’s Association.

After getting involved with the Alzheimer’s Association, Callahan now participates in a Zoom-based peer-to-peer group with others facing early stage dementia across the state.

As the COVID-19 pandemic continues to alter daily life and threaten the health of millions in the United States, the Alzheimer’s Association is providing virtual programs to ensure that individuals with dementia and their caregivers have access to information, support and resources. In addition, their free 24/7 Helpline (800.272.3900) offers around-the-clock support for caregivers and families.

The Alzheimer’s Association is a worldwide voluntary health organization dedicated to Alzheimer’s care, support and research. Its mission is to lead the way to end Alzheimer’s and all other dementia — by accelerating global research, driving risk reduction and early detection, and maximizing quality care and support. Visit alz.org or call 800-272-3900.