Dorothy Hutchins among top runners in the country 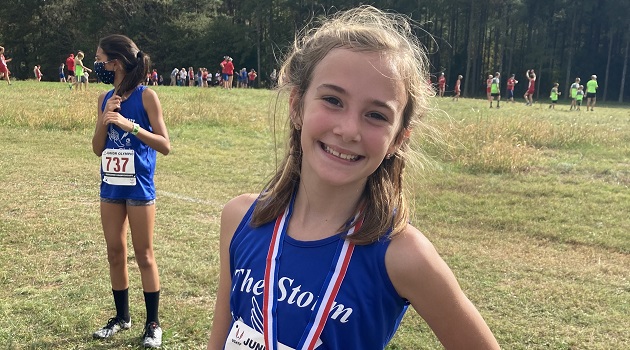 A Leaphart Elementary fourth grader is ranked among the fastest female runners in her age group in the country.

Dorothy Hutchins won the United States of America Track & Field (USATF) Cross Country Junior Olympics South Carolina State Championship in Newberry November 7. The win qualifies her to compete in the USATF Nationals, which will be held in Kentucky December 12-13.

“I am so excited to be going to Nationals and racing people that challenge me,” Hutchins said. “I really love running because it pumps me up. I really enjoy being around people who enjoy racing as much as I do.”

Dorothy competed in the 9-10 age group at the 3K distance during the USATF State Championship. She raced against 29 other girls from across the state and won with a time of 12:29. This is her second year running cross country although she has been running local area 5K road races for a number of years.

“As a parent I am so proud of my daughter,” Sara Hutchins said. “Winning the state championship was Dorothy’s goal at the beginning of the season and we are all so proud that she was able to reach her goal.”

Dorothy is currently ranked 12th in the nation. She will continue her Tuesday and Thursday training sessions and will get into a few local area runs to keep her racing legs in shape before the national competition.

“Students like Dorothy give us #PrideIn5 because she exemplifies what it means to be a stellar STEAM student,” said Leaphart Elementary School Principal Courtney Sims. “She showcases her talents in the classroom, on the track, and beyond. Her Leaphart family will be cheering her on.”