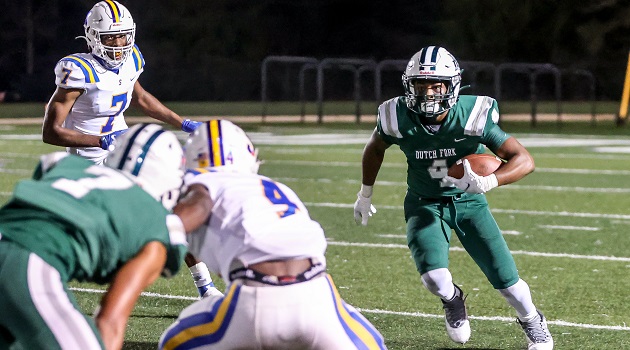 With a 24-0 shutout over Sumter in last week’s 5A lower state title game, Dutch Fork’s varsity football team is set to play for another consecutive state championship on Friday.

The Silver Foxes (9-0) will take on T. L. Hanna (7-0) at 7:30 pm in Charlie W. Johnson Stadium at Benedict College for the Class 5A varsity football state championship. It will be the second straight battle of undefeated teams deep in the playoffs and Dutch Fork’s shot at a fifth consecutive state title.

Sumter’s Gamecocks were undefeated before last week’s semifinal game against Dutch Fork, and both teams completed the same number of plays with nearly the same ball possession minutes. While the Silver Foxes were penalized six times for 90 yards against Sumter’s four penalties for 38 yards, it was, once again, the number of times the Foxes got the ball into the end zone that made the difference.

Dutch Fork quarterback Will Taylor completed 12 of 17 passes for 213 yards and two touchdowns (TD), while Sumter completed two of eight attempts for 10 yards and no TD’s. The Silver Foxes rushed for 209 yards and one TD on 34 carries, while the Gamecocks amassed 222 yards but no TD’s on 43 carries.

Furkan Unlutaskiran scored six points for Dutch Fork with a field goal and a good PAT after each TD, while Taylor, Antonio Williams and Elijah Spencer got the ball over the goal line for the three touchdowns.

On the other side of the ball, Dutch Fork’s defense held Sumter to 232 total yards while the Foxes recorded 422 total on offense.

Friday’s championship battle between Dutch Fork and T. L. Hanna will not be the first one for these two teams. The Silver Foxes will be playing for a similar result as the last time when they played the TLH Yellow Jackets: a state championship.