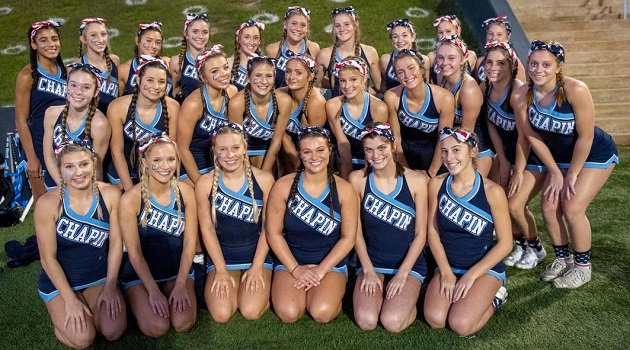 The 2020 competitive cheer state finals competition is this weekend at Florence, and two local powerhouse teams will be there.

Chapin and Dutch Fork each qualified last week for a berth in the finals competition, along with other nearby competitors, and they will vie for the Class 5A state title once again.

According to South Carolina High School League (SCHSL) records, the Eagles hold the distinction of winning the most state titles (15), and Dutch Fork is in a tie with Liberty High School for the second most titles (7). In Class 5A competition Chapin is the two-time defending state champion.

At the 5A qualifying round last week, top teams were clustered tightly together with their final scores. Lexington was tops with a score of 320, River Bluff was second at 309, Chapin third at 307, St. James fourth with 304, and Dutch Fork scored 280 points to take the fifth slot. Twelve teams in each classification advanced to this week’s state finals.

Dutch Fork, Chapin, Lexington and River Bluff are all Region 5-5A competitors during the regular sports seasons. Blythewood (276) and Spring Valley (262) — midlands 5A teams out of Region 4 — also advanced to the state finals.

Competition should be very tight again this year with the same top teams competing once again for the title.

State finals competition begins at the Florence Center on Saturday with Class 3A teams at 10 am, then 4A at 2 pm, and then 5A teams at 6 pm.

Public attendance is on-line only, according to the SCHSL, and tickets are $12 to view the competition that way. Information is available at schsl.org at the link 2020 Competitive Cheer Championships.