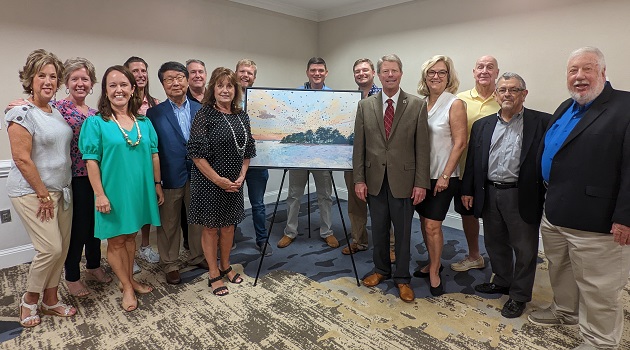 Representative Chip Huggins was recognized for his many years of service to Capital City/Lake Murray Country (CCLMC) and was presented with the Lake Murray Legend Award at the September board of directors meeting.

“We feel that Representative Huggins is the perfect candidate to receive the first Lake Murray Legacy Award,” said Miriam Atria, President/CEO of CCLMC.

Board Chairman, Jimmy Chao said Huggins, “has been a tremendous help in building the organization and we thank you for your many years of service.”

Notable guests in attendance were Representative Paula Rawl Calhoon (Ex-Officio), who shared memories and stories of her time working alongside Huggins. Butch Wallace, Senior Advisor to U.S. Representative Joe Wilson thanked Huggins for his years of service and extended gratitude from Wilson.