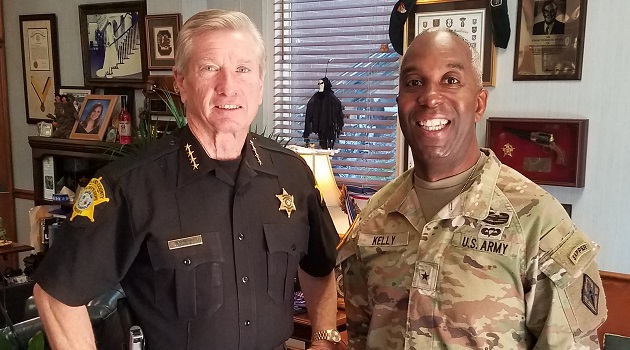 Discussions range from family to recruiting to fitness

Kelly, the 53rd commanding general of Fort Jackson, the Army’s largest basic training facility in the nation, assumed command of the historic military post in late August. The Richland County Sheriff’s Department has a long mutually supportive history with Fort Jackson which was established in 1917 during America’s mobilization for World War I.

In addition to serving as sheriff of Richland County, Lott holds the rank of brigadier general in the S.C. State Guard (SCSG), one of several elements within the S.C. Military Department which includes the S.C. Army National Guard, the S.C. Air National Guard, SCSG, and the S.C. Emergency Management Division.

During cataclysmic weather events like “the thousand-year flood” of 2015, both RCSD and the SCSG have worked in close coordination with Fort Jackson and the various Army units based there.