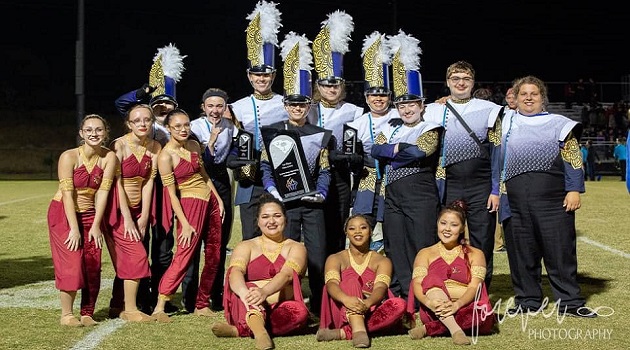 The Chapin High School “Pride of the Midlands” 2022 show was entitled “Tower” and was an homage to ancient architecture. The show featured music from Scheherazade by Rimsky Korsakov, Heat of the Day by Pat Metheny, Blue Ales by Vince Corradi, and original music by Ryan George. The band was led by Drum Major Tanner Richard. “Tower” featured two soloists through the show, Will Cuneo on trumpet and Aaron Parr on trombone. The band finished 1st in their class with high music, high visual, high effect, and best Colorguard at the Palmetto Esprit de Corps Invitational and the River Bluff Swamp Classic Invitational. The band also won the South Carolina Band Directors Association (SCBDA) 4A Lower State Championship held at White Knoll High School, and finished 6th place at the state finals, defending their lower state title by being the highest-scoring lower state band at state finals.

“I could not be more proud of the dedication and effort from our Chapin Band students, parents, and staff,” Blake Fowler, Director of Bands said. “It takes a village to run a band program, and our village is dedicated to excellence! This was a season to remember!”

Silver Spirit Marching Band at Dutch Fork High School won Best Percussion at both the Palmetto Esprit de Corps Invitational and the River Bluff Swamp Classic Invitational. The marching band was also named a finalist in the SCBDA 4A State competition. This is the 10th year in a row that the band has made finals. At 4A State, they placed 8th overall and 2nd place for bands from lower state. The Dutch Fork Symphonic Winds was selected to perform at the University of South Carolina Band Clinic this February. The band submitted a recording of its performance from the Concert Performance Assessment at the end of the last school year and were selected as one of two high school bands in the Southeast to perform at the clinic. This was the first time the band program ever performed at this event.

“I am incredibly proud of the hard work and dedication the Dutch Fork Band has put into this marching band season,” Jeremy Ley, Director of Bands said. “This is an awesome group of students and I am truly thankful to get the opportunity to work with them this season. I am also thankful for the immense support from our band parents, volunteers, the Dutch Fork Band Booster Club, and the administration at Dutch Fork High School!”

Irmo High School finished 11th in the 3A classification. The Irmo High School Marching Band’s competitive season began by competing at the Mustang Classic hosted by Midland Valley High School on September 24th. The ensemble achieved Best Overall Spirit, 1st Place Overall Effect, and Best Music Performance, with the ensemble placing 1st. The ensemble competed at the state level for the first time since 2019. At the SCBDA Lower State Championships, the ensemble placed 5th. At the SCBDA State Championships, the ensemble placed 11th. During band camp, the ensemble was featured on WLTX for the story “Irmo Band Students Have New Ways to Stay Cool.” The ensemble was also featured in The State for winning the poll “The Midland’s Best Marching Band.” This season was the first season and the first year of teaching for the Director of Bands Hannah Redd and Director of Percussion Michael Calamas.

“As the Director of Bands at Irmo High School, I am extremely proud of the members of the Irmo High School Marching Band,” Redd said. “From the beginning of the season, members showcased their determination, commitment, and passion for the marching arts. Members embodied our core values of excellence, innovation, tradition, and esprit de corps and have continued and built upon the legacy of the Irmo High School Marching Band. The success of this season would not have been possible without the Irmo Band Boosters, community members, administration, staff, and Irmo Music Foundation.”

School District Five’s Coordinator of Athletics, Physical Education, & Arts Steven Puckett said, “Congratulations to all of these exceptional band students and their directors for these outstanding achievements and for representing Lexington-Richland School District Five in such a professional manner.”