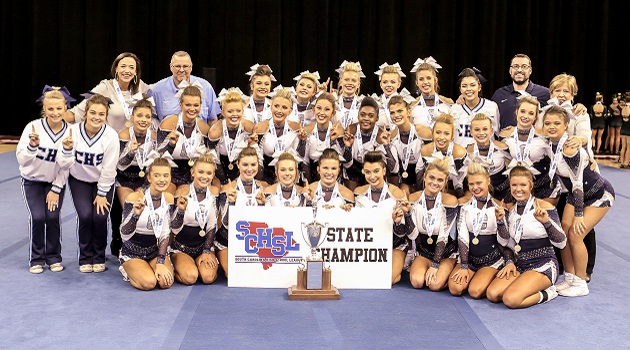 Chapin won its 14th competitive cheer state championship, two-time defending 5A champion Dutch Fork took fourth place – just behind River Bluff and Lexington – and the Silver Fox varsity football team won its second round game to advance to round three on the road this week.

Now at 14, the Eagles continue to hold the state record for number of competitive cheer state titles, with the Silver Foxes in a tie with Liberty at second-most with seven, each. Chapin won the 4A title last year, but competes in Class 5A now giving it the distinction of having won the state championship in Class 2A, 3A, 4A and 5A competition.

Dutch Fork won the 5A title last year with Lexington and River Bluff in second and third place. With the addition of Chapin to the 5A ranks, and White Knoll taking No. 8 last Saturday, local area Lexington County teams took five of the top-10 places in last week’s state finals competition.

Just behind Chapin, River Bluff, Lexington and Dutch Fork, Boiling Springs, Dorman and Mauldin were fifth through seventh, respectively, then the Timberwolves, then T. L. Hanna and St. James rounded-out the top-10.

Two other midlands area teams were just out of the top-10. Blythewood came in 11th, and Lugoff-Elgin was No. 12 out of a field of 16 teams.

And, just over the Saluda river, two-time 3A state runner-up Brookland-Cayce earned No. 7 in the 4A competition, and Airport came in at No. 10. In addition, A. C. Flora was No. 4 in Class 4A, and Lower Richland came in at No. 12.

In Class 3A competition, nearby Lexington County teams extended the wins and honors for the midlands. Mid-Carolina won the 3A championship – Liberty, with the aforementioned seven state titles, took second place – Gray Collegiate finished fifth, and Gilbert took 10th place out of a field of 16 teams.

In the varsity football state playoffs, Dutch Fork defeated West Ashley 63-20 last Friday at home, but will go on the road this week to take on West Florence in Round Three – also known as the state quarterfinals or the lower state semifinals, depending on a person’s point of view.

The 5A state finals game is set for December 8 at 6:30 pm at USC’s Williams Brice Stadium.