Gala for a Greener Midlands another honors local businesses

By: John Griggs
In: Non Profit 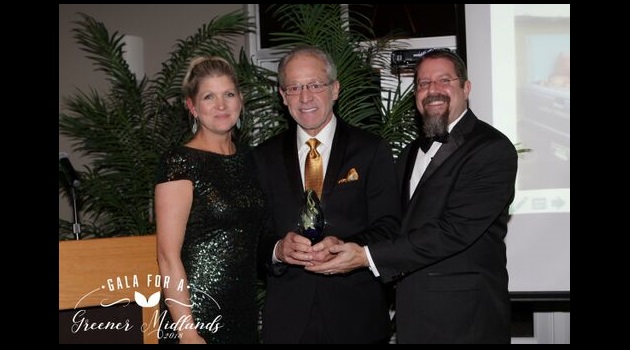 Keep the Midlands Beautiful hosted a Gala for a Greener Midlands November 16 at the River Center at Saluda Shoals Park.

During the evening’s festivities, the Midlands Green Awards were presented. All funds raised will go towards beautification in the Midlands.

The Green Outstanding Educator Award was given to Bill McSorley; Bill McSorley, a professor at Midlands Technical College, became passionate about recycling after serving as the Chairman of the Faculty Council. McSorley was awarded a grant for $11,000 to start a recycling program. Currently, he has the program running on two campuses, with plans to expand to all five.

The Green Event Award was given to Big Nosh; The Big Nosh serves upwards of 2,000 guests through the Tree of Life Congregation. The Tree of Life Green Team uses compostable plates, cups, and flatware at the meal, and later sorts all of the waste, separating recyclables and compostable material from refuse.

The Green Small Business Award was given to Titan Pro Wash; Titan Pro Wash specializes in formulating environmentally-friendly and 100 percent biodegradable cleaning solutions and cleaning methods. The company recycles items from packaging to equipment and works hard to develop methods that use less water, fuel, and cleaning solutions, with better results. Titan has replaced gas engines with electric motors where possible and is developing a solar-powered cleaning unit.

The Green Sustainability Corporate Leadership Award was given to Nephron; Nephron’s industry-leading manufacturing plant in West Columbia has had a positive environmental impact by promoting and incorporating green building practices into their manufacturing facility. The facility was designed to combat indoor air quality issues and is equipped with energy efficient lighting and ventilations systems that are adequate for their manufacturing systems. The building uses at least 30 percent less water and 10 percent less energy than the US Green Building Council (USGBC) baseline for similar manufacturing buildings.

The Green Large Business Award was given to Sonoco Recycling; Sonoco employs a full-time recycling educator to act as a facilitator and outreach coordinator for businesses, schools, congregations, agencies, and communities. Since 2004, Sonoco has partnered with Keep the Midlands Beautiful on the Green Steps School Initiative, and has been an active member of the Midlands Green Business program since its inception. Sonoco seeks to increase recycling by weight from 75 percent to 85 percent of global packaging output; to increase post-consumer recycled resins in plastic packaging from 19 percent to 25 percent; to meet standards for on-package recyclable labeling for approximately 75 percent of rigid plastic packaging; and to ban resin additives that can degrade in landfills or waterways by breaking into micro-plastics.

The Green Elected Official Award was given to Councilman Darrell Hudson; Councilman Hudson has, single handedly, done over 150 of his own litter pick-up projects. He drives a truck that was painted by students at Lake Murray Elementary supporting his battle against litter for a TrashFreeDistrict3. He is a proponent of larger lots for houses, enhancing green spaces, and supporting storm water management. He has been instrumental in helping Keep the Midlands Beautiful recover from a devastating office fire and move to a new facility by leveraging community support and matching dollars from the Michael J. Mungo Foundation.

The Green Enforcement Officer of the Year was given to The Midlands Gang Task Force; Through the partnership with Keep the Midlands Beautiful, Palmetto Pride, and Lowe’s, the Gang Task Force has been able to paint over gang graffiti and tags. This helps the Task Force in their mission to stabilize local communities by deterring and dismantling violent street gangs.

Finally, the Keep the Midland Beautiful Board of Directors recognized Keep the Midlands Beautiful Partner of the Year, awarded to Jamie Hook; As Public Works Director, Mr. Jamie Hook wears many hats, but what ever the task, Jamie always gets it done. He has the respect of both his colleagues, employers, and staff. At Keep the Midlands Beautiful, we know that we can always count on Mr. Hook for help with cleanups and recycling, and we know that citizens in West Columbia genuinely have someone who cares about their needs. Jamie is a pleasure to work with and it is our honor to award him with the Partner of the Year Award.