Will the lake refill in time? 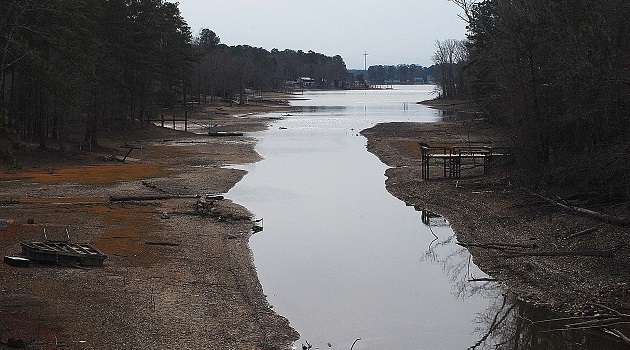 In August of 2018, SCE&G announced that the company planned to lower Lake Murray’s water level from full pool (358’) to the 350’ elevation to help curb the growth of nuisance aquatic weeds and to push accumulated organic sediments out of shallow areas into deeper waters. Organic nutrients in shallow areas can easily decay which can lower oxygen levels and cause fish kills.

SCE&G noted that, “During the Saluda Hydro relicensing process, stakeholders identified and agreed to periodic draw downs as necessary to maintain good water quality.” Draw downs also provide opportunity for homeowners and businesses to make repairs to docks, ramps and other structures.

The drawdown began in October but was slowed by heavy rains in the watershed, which brought the water level up instead of down. The 350’ target level was not reached until early February.

SCE&G has now begun the process of refilling the lake back to full pool.  It should be noted that while stakeholders in the relicensing process agreed to draw downs every three years, draw downs would be considered only if wet conditions were prevalent in the watershed above the lake. It was agreed that flows in to the lake during November would need to be at least 1700 cfs before a draw down would be considered.  In other words, the lake would not be lowered during dry conditions.

Refilling the lake to its normal spring high is very important.  First, at low levels there are hundreds of unmarked hazards that pose a danger to boaters. We don’t want our Lake Murray families to have to guess where it is safe to boat.  Secondly, the level needs to be high enough in April to inundate spawning areas which are usually located at the backs of coves. Thirdly it’s important that lake homeowners, who make up the largest lake user group, be able to access the lake and use their docks. And lastly, low levels during the spring and summer can negatively impact the lake’s businesses, public and private marinas, and tourism.

Lowering the lake level is a serious matter and shouldn’t be taken lightly.  Contrary to what SCE&G said in its press release, there is no compelling evidence that it is necessary to draw the lake down every three years. There is a scientific model developed from hydrological data from nearby lakes that what used to evaluate Lake Murray. The results showed that drawn downs should help improve water quality.  To determine whether draw downs are good and maybe necessary, a study needs to done to see in fact in the model’s prediction is accurate. The results of the study should be made public.  Did it help get rid of the weeds?  Did it actually scour away accumulated sediments in the riverene areas of the lake? Will oxygen levels improve, especially in the lower lake during the summer where the striped bass population suffers from low DO.

While wet conditions exist in the watershed now, net inflows to the lake are only around 2000 cu. ft./ sec. It will take approximately 13 billion cubic ft. of water to refill the lake.  With only a month and a half before recreation boating season begins, we will need better than average rainfall to bring the water back to safe levels. If we experience dry conditions and they persist, the lake will not refill this year.