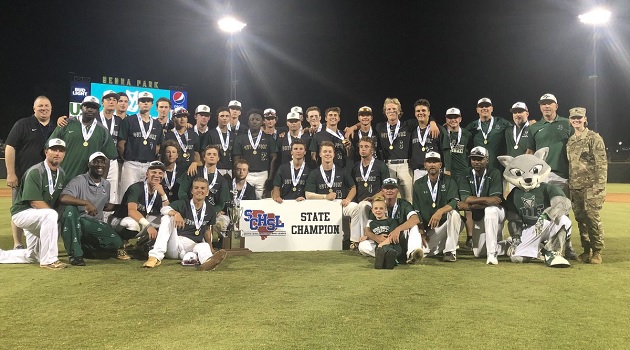 “I’m living the dream with these players,” said Dutch Fork High Coach Casey Waites. “We’re living the dream. We expected to do this a long time ago. My stress level was high just trying to make the playoffs. So this was a lot of fun.”

Dutch Fork finished third in Region 5-5A, one of the toughest conferences in the state and spent much of the playoffs on the road, playing only two home games.

“I am incredibly proud of this team and their coaches,” said Dutch Fork High School Principal Dr. Gerald Gary. “What a wonderful testimony of pushing through adversity to win the state championship Friday night. The atmosphere at Segra Park was electric and so exciting for all of our Fox Family to experience. Additionally, I am proud of Coach Waites for being named the South Carolina Baseball Coaches Association Coach of the Year. As Coach Waites said following the game, he is living the dream. I am thankful that he helped these young men fulfill their dreams of winning a state title!”

Knotts added, “This team battled through numerous difficulties and setbacks, but displayed enough resolve and determination to overcome all the obstacles that were in their way. Coach Waites and his team are to be commended for an outstanding season that will go down, for now, as the greatest in the school’s history. Congratulations 2019 Silver Foxes Baseball!”