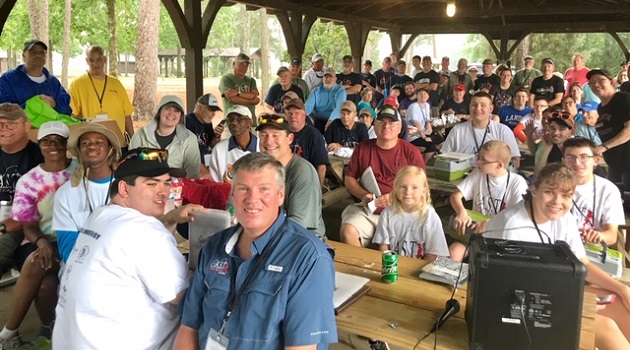 The CAST FOR KIDS fourth annual special needs kids fishing event was held at Billy Dreher Island State Park on June 7. The event was sponsored by Mt. Horeb Methodist Church, the Lake Murray Seniors Bass Club, Frank’s Car Wash, Joy Day Program, and the Midstate Dove and Quail Club. CAST FOR KIDS is a non-profit organization that has been sponsoring special needs kids’ events and wounded warriors’ events for 28 years all over the United States.  In the future, this event will be named the Bill Crapps Memorial Cast for Kids Fishing Event in honor of a bass club member who passed away in March.

On a cloudy Friday morning, 25 children showed up at 8:30 with their parent or guardian and were met by members of the Seniors Bass Club. The kids and their adult were paired up with the bass club boaters.

Each kid was given a spinning outfit, a tackle box and a T-shirt. Each boater was given a CAST T-Shirt and cap.  The teams moved out about 9 o’clock to search for fish. A reporter from WIS TV was present and went out on a pontoon boat with boat captains and kids to film some of the activity. All the kids reported having a great time fishing and boat riding.

The boats reported back in around 11:30 and all participants were treated to a BBQ lunch provided by bass club member Jim Edwards and his wife, Barbara. After lunch, Jeff Barnes, southeast Director for CAST, introduced local bass pro Davy Hite to the group. Davy is a former Bassmaster Classic Champion, two-time Bass Angler of the Year, Forrest Wood Cup Champion and will be inducted into the Bass Fishing Hall of Fame in October. He is a friend to many of the Senior Bass Club members.

Each kid was presented a plaque with a picture of themselves and their boat captain. The WIS TV report was shown on the news that evening and may still be available on their web site. This is the only CAST event held in South Carolina. Anyone interested in sponsoring an event can go to the CAST web site for more information.