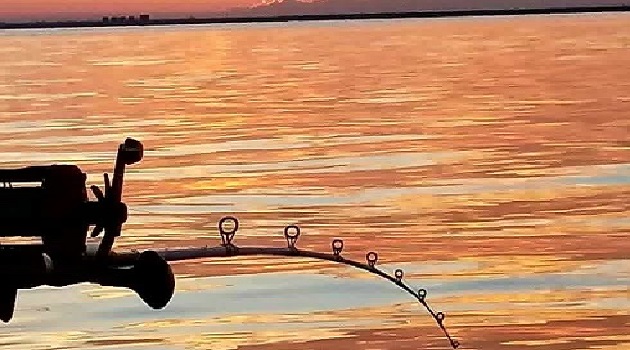 Due to a lot of members taking vacations, we had fewer than normal teams fishing. The weather was nice except for the wind which blew the entire day. Of course the heavy breeze kept down the temps which was a blessing. The fish also seemed to cooperate as no one blanked. Of the 13 teams who fished, 9 had a limit. Because of the new pay-out schedule, only the top 5 teams got a pay check.

They are as follows: Taking first place was the team of Skip Parker and Joe Dowdell who weighed in 21.15 lbs. They also had the big fish at 6.20 lbs.(see photo) This was Parker’s second first-place finish this year. In second place was Bernie Belville and Earl Purcell who weighed in 16.85 lbs. Third place was won by Jim Edwards and (yours truly) Joe Abdalla who weighed in 12.90 pounds. Carl Horn and Willie Crocker took fourth place with 12.45 lbs. This was followed close behind by Bill Beard and Quentin Hopkins with 12.05 pounds.

Five dead fish were weighed in which cost 1 ¼ lbs being deducted from 4 different teams. Only one team came in with just one fish. All in all, it was a great day for catching bass if you knew where to go and what to use.

Our next tournament will be on July 24. Anyone wishing to get more info on the club can visit www.lakemurrayseniorsbassclub.com. Those wishing to join the club can call our club president, Carl Horn, at 803-364-9200. The only requirement is a minimum age of 55. We always meet on the third Wednesday of the month at which time we draw for partners and fish the following day (Thursday). We have enough members that no one fishes with the same partner more than once per year.