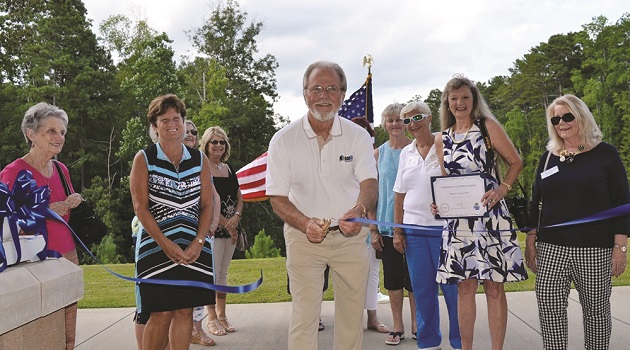 The club has worked about two years to develop a Bluebird Trail in Chapin. The project was first introduced to club members in August 2017 when, then President Cindy Chin, presented the idea to the club.

Since that then club members have worked to generate community involvement and educate themselves and the community about bluebird habits and what it takes to develop a successful bluebird trail. The trail began as a true community trail with more than 3 dozen new nesting boxes being placed in area backyards during 2018. In early 2019 Chin, as Project Chair, approached Chapin Mayor David Knight and Chapin Town Council about the possibility of placing a trail directly behind Town Hall on an open expanse of property which will one day become a town park. Knight agreed.

Funds to buy five nesting box kits were donated by six people from the community and the trail became a reality May 20.

Garden Club honorary member Ed Chin, who was instrumental in completing the project, dedicated the trail, highlighting the importance of community involvement and the new partnership formed between the garden club and the Town of Chapin.

Knight cut the official blue ribbon and reminded those in attendance Chapin was deemed a bird sanctuary back in the late 80’s. He said the new trail is a great addition to Chapin’s efforts in conservation and preservation. Knight presented the club with a certificate of appreciation as a Chapin Community Partner.

DeBruhl with the SC Bluebird Society, who provided expert education, guidance, and encouragement throughout the development of the trail; commended the garden club and the town on the partnership and presented a nest box and baffle to the club to increase the number of nesting boxes from 5 to 6. He encouraged working to have Chapin meet criteria to become certified as a bluebird habitat.

Donnelly, whose theme “Birds of a Feather” inspired the project congratulated the club and provided facts about bluebird habits and other trails around the state.

Following the official ceremony, attendees gathered in the community room to enjoy beverages, hotdogs, and brownies as they mingled freely among educational displays and exhibits. Exhibitors included the South Carolina Wildlife Federation, the Carolina Wildlife Center, and the SC Bluebird Society. Youngsters were entertained at an activity table featuring opportunities to color bluebirds and decorate miniature birdhouses with felt and glitter stickers featuring bluebirds, owls, flowers, and more.

Club member Janet Hurley surprised the Chins by announcing the bluebird trail will be known as the Cindy and Ed Chin Bluebird Trail. The Chins were presented with an engraved sign denoting the name.

As the program ended DeBruhl lead a guided tour of the nesting boxes along the trail. The tour included a demonstration of how to properly approach, open, and monitor an active bluebird nesting box. State Representative Chip Huggins joined the group for the tour and presented a certificate commending the Chapin Garden Club for ongoing efforts to beautify Chapin and bring awareness to local citizens of nature’s wondrous bounty.