Hurry Up and Wait: A Veteran’s lesson in patience 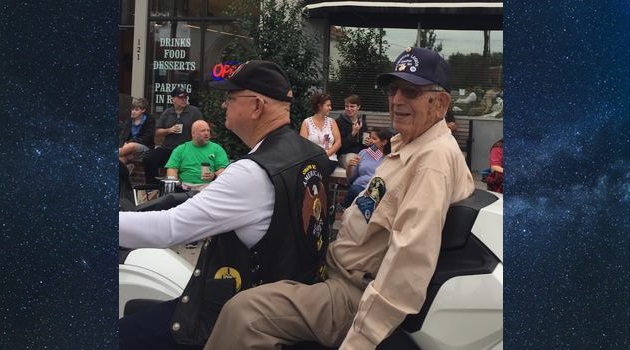 Something all service members understand–whether Soldier, Airman, Marine, Sailor, or Coastie—is that the military has perfected a system whereby paperwork, especially important paperwork, sometimes becomes misplaced, lost, or simply disappears. Many times, it is only temporarily lost, and eventually the paperwork finds its way to its rightful owner. In the meantime, service members do what they know best – Hurry up and wait.

World War II veteran Private First Class Gerald White knows what it is to wait. After serving honorably with the United States Army in World War II he was quietly discharged and went home to New York, leaving the war behind him. At that point, it could have been a closed chapter had it not been for the fact that even though the Army had given PFC White his final pay, discharge papers and train ticket home, his uniform felt naked: despite its best efforts the Army somehow forgot to present PFC Gerald White his combat awards.

The engagements Private First Class White participated in weren’t small skirmishes consigned to the footnotes in history books. Citizen Gerald White found himself drafted right out of high school in Ovid, New York to enjoy a comfortable stay at Camp Blanding, Florida for basic training before boarding a ship for a luxurious cruise across the Atlantic just in time to disembark right into the jaws of the Battle of the Bulge. He continued fighting Hitler’s Army through France, in the forests of the Ardennes, and across the Rhine River all the way to Czechoslovakia. Upon returning home, the Army gave him a railroad ticket from Fort Dix to Ithaca where dad picked up son at the station, each happy that he was home.

After returning home, Gerald finished the two credits needed to graduate high school, went to college and then traveled the world serving his country with the federal government

But if the Army is anything it is tenacious in getting the job done, and so when members of American Legion Post 193 in Chapin found out that paperwork was missing on one of their own, they came together like Soldiers falling in formation before maneuvers. They made phone calls, wrote letters and emails and contacted people throughout the chain of command. The task was slow and tedious, like a long foot march, but in May of 2019 the Army located PFC White’s awards and mailed them to him, 75-years later. Tenacious.

Upon hearing the news about the finding the paperwork for his medals, Mr. White said in a quiet, almost humble voice, he replied, “Well, it’s better late than never.”

On July 23 at the Chapin American Legion Post 193 at 102 Lexington Avenue in Chapin, Major General Van McCarty will award Private First Class Gerald White the Combat Infantryman’s Badge, Bronze Star and Campaign stars he earned so long ago. This event is open to the public. Mission Accomplished.