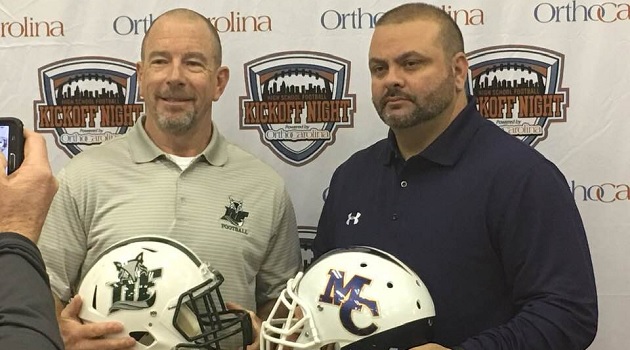 Dutch Fork will play host to Mallard Creek, of North Carolina, Friday at 6 pm in this much anticipated matchup after last year’s game between these two squads was canceled because of inclement weather at Charlotte.

Whereas the Silver Foxes finished the 2018 season undefeated with their third state title, the Mavericks completed the season with only a single loss and ended their season in the second round of the Class 4AA West playoffs. As the 2019 season is just getting under way, Dutch Fork is No. 67 by maxpreps national rank statistics and No. 1 in South Carolina, and Mallard Creek is ranked nationally at No. 241 and ninth among North Carolina teams.

The Dutch Fork Touchdown Club is calling this one unfinished business, but — weather permitting — that should all be resolved at Silver Fox Stadium Friday night.

Irmo’s varsity Yellow Jackets will start the regular season Friday on the road at Lexington at 7:30 pm in their first on the record game under new head coach Aaron Brand. Irmo won it’s matchup against Crestwood last week in the Sumter Sertoma Jamboree, while — in the same jamboree — Dutch Fork’s game was canceled because of weather, as was Chapin’s matchup in its own Aun and McKay Kickoff Classic on Saturday.

The Eagles will get their regular season under way this Saturday when they visit their nearby archrival Mid-Carolina Rebels to kick off the season with a big one.

And, also buzzing right now, volleyball, girls tennis, girls golf, swimming, cross country and competitive cheer are all starting this week or next, with the exception of competitive cheer which has its first official competition date September 2.