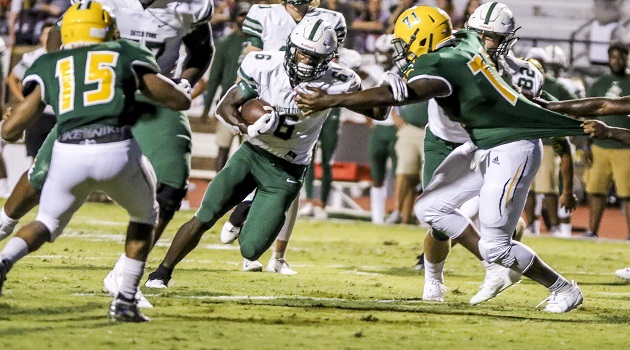 All three district varsity football teams won their Week 1 matchups last week, including a first-ever win, a long-running rivalry win and a shutout. And this week’s action could get even better when the Silver Foxes visit the Yellow Jackets for the annual rival matchup of these two local community programs.

Irmo head coach Aaron Brand and the Yellow Jackets recorded Brand’s first-ever victory at the helm of the Irmo (1-1) program when they defeated W. J. Keenan (1-1) 43-7 in the team’s first home game of the season last week. This week’s non-region home game with Dutch Fork will be the second of a three-game home stand for the Yellow Jackets, and it could be a matchup to see when Irmo’s new coach and team take on their three-time defending 5A state champion neighbors.

Next week Irmo will play host to Brookland-Cayce, and Dutch Fork will be at home against Boiling Springs, the Silver Foxes’ 2016 state finals opponent.

But this week all eyes are on the Irmo community matchup at W. C. Hawkins Stadium: Silver Foxes at Yellow Jackets Friday at 7:30 pm.

And — while we’re talking rival games — Chapin (1-0) extended its lead in the long-running “Battle for the Bell” when the Eagles defeated nearby Mid-Carolina (1-1) 35-20 in their season opener at home. It was the Rebels second game of the season after defeating Whitmire 27-0 in their Week 0 opener.

This week the Eagles will play at home again when the Lugoff-Elgin Demons visit Chapin Friday at 7:30 pm for the Week 2 matchup. The Demons will come into the game at 1-1 after a season opening win against Westwood and a loss to Camden last week.

Chapin will play its first road game next week when the Eagles visit the Newberry Bulldogs in their third non-region game of the season.

Weather Note: At this mid-week writing the Lexington Richland School District Five office was monitoring the Hurricane Dorian threat and advised that they would issue statements as necessary using the automated phone system, website and local and social media. No cancellations had been announced at that time. Also, the South Carolina High School League was still in a conference call on the same weather issue at that time.