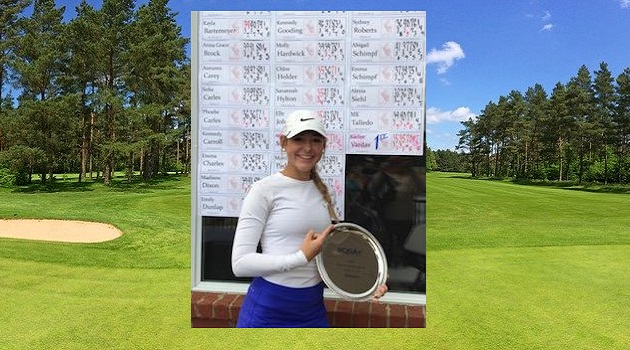 Karlee Vardas won the Class 5A state individual championship in a playoff while her Lexington wildcat team placed second.

“It was crazy coming down the stretch. I was in a good position but the girl I was competing with birdied three out of the last four to Tie,” Vardas said. “Then in the playoff, I hit the par-five and had to make a tough putt to win the individual title. It was incredibly emotional because our team finished second.”

Vardas, the Second-ranked junior in the state recently committed to Georgia Southern. She has been playing golf just a few years but she has worked hard to accelerate her progress.

“Most golfers don’t understand the benefits of strength training. Karlee does and understands this is important. She works hard in the Gym,” said Ken Taylor, Director of Strength Instruction for Tsunami Bar Training Center, and the Junior Wildcat’s fitness coach.

Before Vardas started playing golf she was a gymnast.

“Karley was a level 5 competitive Gymnast, then tried Cheerleading but started playing golf because it was a sport the family could all play. Her brothers were playing so she started in sixth grade and just before seventh grade, played her first 18 holes. She has been all in ever since“ said proud father Steve Vardas, who was grinning ear to ear.

Timberlake Country Club and their Ladies Golf Association hosted a very special Pro-Lady November 4 that will be discussed next week so be sure to stay tuned.

Timberlake CC also was the host club for the Irmo Chapin Winter Youth Golf Tour that started in 1992. The Winter Tour was started to promote families playing together. Chris Miller who now works at CC of Lexington and E Rutherford, General Manager of LinRick, were both on the Timberlake golf staff and in the origin of this program. The main feature of this program is the entire family can be involved. Parents Participate as caddies, course guides, forecaddies or fans for there players. Players travel to different golf courses around the Midlands each week to play nine holes on Sunday afternoon, 3 pm Tee time. Brand new players to college prep and everything in between ages 7 to 18 are invited to participate. It’s a recreational developmental program with all learning taking place on the golf course. It’s fun learning through play and Dr. Morris Pickens, Sports Psychologist began working with the program in 1996. His educational foundational information is the cornerstone content that continues to be utilized.

I’ll close with a tip that former professional basketball player Ryan Stack said about basketball growth; “Winter for Summer and Summer for Winter.” The golf application & interpretation is short and sweet; the work you do in the Winter can pay off in the summer so be thinking of what your winter plan can be.