By: John
In: Health, Public Safety 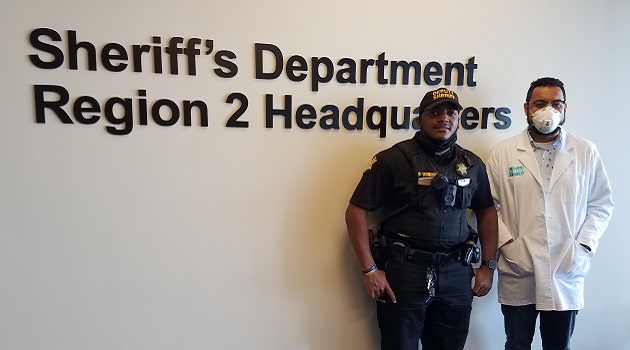 The Richland County Sheriff’s Dept. (RCSD) was selected by the S.C. Dept. of Health and Environmental Control (DHEC) to be the pilot agency for a COVID-testing program in which first responders will be tested quickly on a large scale with little notice.

“DHEC notified us last week that we had been tapped for the lead,” said Richland County Sheriff Leon Lott. “They chose us because we’re one of the largest agencies in the state. They wanted to see how quickly it would be done, how effective it would be, and would we agree to be the pilot.”

Three days of testing began Wed. morning and will conclude Fri. afternoon at RCSD’s Region Two headquarters facility. As of midday Thurs., approximately 400 deputies and non-sworn employees of RCSD had been tested with saliva samples being overnighted to Rapid Reliable’s laboratory in Los Angeles. Results are expected within 24-48 hours.

“The test project here in South Carolina has been very successful so far,” said Kevin Bland, Rapid Reliable Testing’s national project director. “We were hoping for a turnout of about 100 people on day-one. We’ve instead tested 294 the first day.”

According to Lott, “Though the testing is voluntary, we’ve encouraged our people to respond and they have. I think everyone appreciates the importance of testing. We want our deputies to have peace of mind, and through this, they will. And DHEC is developing this program so that they will be able to test all first responders on a large scale; testing a large volume of people in a very short period of time.”

2020-10-22
Previous Post: District Five pays tribute to principals, through National Principals Month
Next Post: This is what we know