Tempers flare at school board meeting 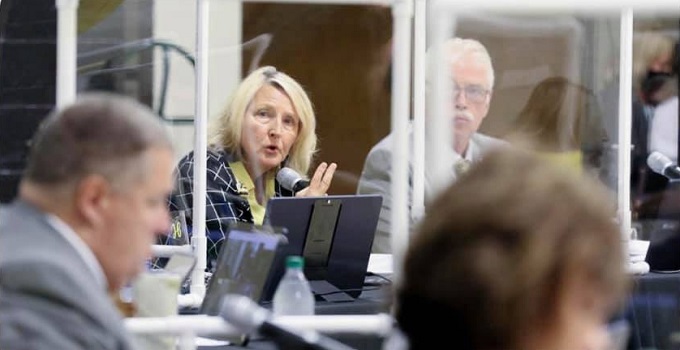 The Lexington-Richland District 5 School Board is getting an earful from parents upset with the guidelines and rules now being enforced because of the coronavirus pandemic.
Board members heard some strong comments and curse words.

“I had to slam the gavel a few times,” said Board Chairwoman Jan Hammond.

Hammond said the District 5 community is sharply divided about how the latest guidelines are being handled. It’s not just about masks, which currently are not required by the district. She said many parents are upset about quarantine requirements.

Students who have come in contact with someone with the virus are not allowed to come to classes but can receive home instruction.

There are a lot of questions, Hammond said, but “there’s not a simple answer.”

The district is offering assistance to students impacted by the coronavirus
Starting Sept. 1, there will be support teams at every school for three hours a week to help students who are quarantined or in isolation.

The district now has an online “dashboard” providing information on the latest data on staff and student cases reported to the district.

Whenever there are positive cases in schools, the district will notify individuals that need to be notified per South Carolina Department of Health and Environmental Control (DHEC) guidelines. The dashboard is updated every morning and reflects data reported the prior day, according to district officials.

At Monday’s meeting, the board responded to recent public criticisms of the district’s actions..

An editor of The State newspaper has filed suit against the district for alleged violations of the state’s open meetings laws in its handling of the resignation of a former superintendent.

The suit alleges the board approved a settlement agreement with former Superintendent Christina Melton behind closed doors and without public discussion or a vote as required by state law.

The district responded that the board did take a public vote on the action on Aug. 9, and denied there was any wrongdoing in the way the settlement was handled.

The district is also firing back at a complaint filed by former school board superintendents that the district’s contract with interim superintendent Akil Ross was unlawful.

In making the motion at Monday’s school board meeting, vice chairman Ken Loveless said the district will file a lawsuit for “malicious interference” with the contract unless the individuals who filed the complaint, do not withdraw the complaint and apologize to the district.

In their complaint to the accrediting agency, the former school district leaders challenged the terms of Ross’ interim superintendent contract. Rather than employ Ross directly, board members reached an agreement with HeartEd LLC, Ross’ private education consulting firm, to provide “superintendent services” for the district for up to a year.