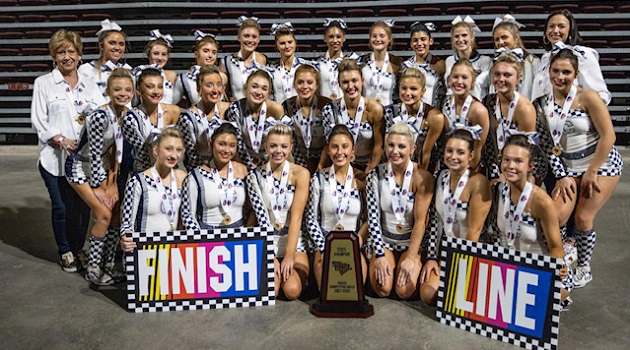 Chapin High School varsity cheer won another South Carolina High School League Division 5A state championship on November 20 at the Colonial Life Arena. The team finished with a score of 349 which was 11 points shy from a perfect score.
“We are so excited to be back on top again,” said Chapin Varsity Cheer head coach Vicki Williams. “After runner up last year, the team was determined to bring the 5A title back to Chapin! The work ethic and determination by these young ladies was amazing. The team has practiced 7 days a week for months with one goal -to become State Champions. Their drive also made them 2021 Region and Lower State Champs. I am so proud of these young ladies!”
For Chapin, it’s the 16th state cheer championship in school history and third since moving into Class 5A in 2018. The Eagles won four straight titles from 2016-19, two in Class 4A and two in 5A. This year’s routine was built around a racetrack theme – the motto “It ain’t over til the finish line comes.”
Since competitive cheer became a sport, Chapin is the only high school cheer team to win state titles in 2A, 3A, 4A and 5A divisions. The Chapin High School cheer coaches also have made history by achieving more state titles than any other South Carolina coaching staff.
Dutch Fork High School finished in 6th place in the Class 5A division and Irmo High School placed 4th in the Class 4A division.

2021-11-23
Previous Post: Congressmen Wilson and Cohen Introduce Resolution to End U.S. Recognition of Vladimir Putin as President of Russia in 2024
Next Post: Arrest Made After Men Stabbed During Fight