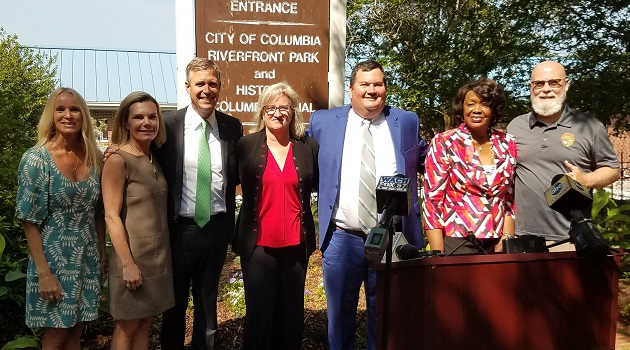 Four mayors, others, gather at Riverfront Canal Park to announce month-long trek across the Palmetto State

“We want thousands to join us here in the Midlands [in mid-July],” said Columbia Mayor Daniel Rickenmann. “Our natural resources are not only our greatest asset, but also our ability to use those resources to leverage and bring people here to our community. Hiking our beautiful trails and taking in our riverfront is a great way to experience the natural beauty of the Midlands.”

“This is an event that indeed brings people together, from all walks of life, enjoying our extraordinary and in-many-ways unique natural resources and the beauty of the same,” said Mullikin. “We started this hike now three years ago really as an offshoot of our S.C. Floodwater Commission where our great Governor Henry McMaster wanted us to get out and hear from folks across the state, so we thought what better way to do it than to hike and be out in the communities and have fireside chats every night along the way.”

Mullikin was tapped by McMaster to chair the gubernatorially established S.C. Floodwater Commission in 2018.

“We will hike, raft, kayak, and SCUBA dive the same highways, byways, deeply forested wonderlands, and beautiful rivers across South Carolina that we do every year, but there will be so much more and many exciting new surprises,” Mullikin added.

West Columbia Mayor Tem Miles said the statewide event will be “greatly expanded” in central S.C. this year. Three days out of 30 will take place in the Midlands. “The opportunities to canoe, to tube, and to hike the trails we have will take place right here in the shadow of the state capitol,” said Miles.

Cayce Mayor Elise Partin described her own experience hiking, paddling, and camping on the banks of the storied Congaree River and the experience of seeing “a zillion fireflies lighting up and twinkling” following a storm. “Truly one of the most majestic things I’ve ever seen, which I would not have been able to see had it not been for access to the river and the Congaree National Park being preserved.”

Partin added, “We are so thankful for our city [Cayce] being born out of the banks of the Congaree River and to be able to enjoy that river. What SC7 is doing to bring attention to all the natural and cultural resources in our state is staggering. It’s important. We are so blessed.”

Mayor Alfred Mae Drakeford from Camden expressed her gratitude over Mullikin’s having brought to the Palmetto State his personal experiences and knowledge gleaned from decades of climbing many of the world’s most arduous mountains and having dived in all of Earth’s oceans.

“I want to thank my friend Tom Mullikin for bringing this home, and a leg of it home [to Camden and Kershaw County],” said Drakeford. “July 16, I will be looking for each and every one of you in the oldest inland city in South Carolina.”

In addition to the four mayors and Mullikin were Dr. Susan Johnson, director of Health Promotion at MUSC (SC7’s statewide presenting sponsor), and Ethel Bunch, president and CEO of Sustain SC (the Midlands’ primary sponsor).

“Recognizing the connection between human health, wellbeing, and the natural environment, MUSC welcomes the opportunity to join forces with SC7 to promote green health and the importance of protecting the precious natural resources of our state,” said Johnson.

“Sustain SC is excited to host the business community of the Midlands July 18, 2022, bringing our statewide vision to the local level, and celebrating the beauty of the outdoors and our historical riverfront that supports economic development in the city of Columbia,” said Bunch.

SC7, which follows a several-hundred-mile route roughly paralleling the Palmetto Trail from the mountains to the sea, is a partnership between two S.C. based non-profit organizations, Global Eco Adventures – founded by Mullikin and whose son, Thomas Mullikin Jr., now serves as president – and the South Carolina National Heritage Corridor (National Parks Service).

2022-05-10
Previous Post: Sheriff Lott and RCSD pledge to “do no harm”
Next Post: Teacher honored at Chapin High