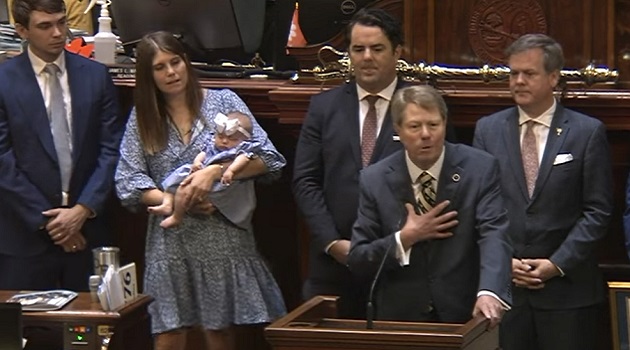 As our regular session has ended, for those of you who have not heard, I am retiring from my service in the House and will not seek re-election. Of course, I will represent our great District 85, until the election in November decides my successor.

Honor and privilege are words that truly and succinctly describe my gratitude to you all for returning me to serve year after year and placing great trust in my representation and leadership through these twenty-three years.

Thanks to you we have accomplished so much, and I am very grateful for my time here in the legislature.

When the clock struck 5pm this past Thursday, Sine Die went into effect, marking the end of the 2021-2022 Legislative Session. “Although many laws might sound like gibberish to non-lawyers (and even to many lawyers, for that matter), ‘sine die’ is not. It’s Latin for ‘without a day’… to describe an adjournment when the date to reconvene is not specified…” (Congressional Institute).

With a combined 27+ hours on the Floor in just three days this week, there was no shortage of work to do. Until the last minute, my colleagues and I fought to push many of our conservative agenda items over the finish line. Our successes this year will make South Carolina a better place to live, work, and raise a family for years to come.

Sine Die Resolution and Pro-Life Legislation: This year’s Sine Die resolution sets out the specific reasons the General Assembly can return until the new legislature is elected in November. This year, we will likely return to pass a final state budget once finalized, and we will review any gubernatorial vetoes.

Furthermore, we included a provision that allows us to return to debate legislation in reaction to a decision of the United States Supreme Court in the case of Dobbs v. Jackson Women’s Health Organization. If, as anticipated, Dobbs overturns Roe v. Wade and pushes decisions on abortion to the states, the South Carolina General Assembly can return to accomplish what we intended with the Fetal Heartbeat Bill: protect innocent life in South Carolina by outlawing abortion.

Status Update on the Budget & Tax Cuts
It has been the year of tax cuts in the South Carolina House. I proudly voted for a budget and an extensive tax cut plan that was designed with the South Carolina taxpayer in mind. We carefully calculated each dollar, putting to use the historic surpluses we had available due to years of conservative budgeting and planning.

Our budget centered around 4 R’s: increasing reserves, roads and infrastructure, raises for teachers and first responders, and over $1 billion in tax relief. It passed the House and was sent to the Senate, where they developed their own version. Given the differences, the House and Senate will each send 3 delegates to meet in a conference committee where they will reconcile the differences to write a final budget that best serves our State. As well as a budget, the Senate also created their own version of a tax relief plan in response to the House’s $1 billion tax relief plan that I supported last month. We hold that our plan better serves South Carolina taxpayers simply because it saves the taxpayers more money. Our plan focuses on collapsing the middle tax brackets to help hard-working middle earners – where the majority of South Carolinians fall.

Conservative Fiscal Planning: Raising Reserves
Part of being fiscally conservative and prepared for the future is having sufficient reserves. Raising our state general reserve fund was a priority for us this year, which helps prepare us in the face of financial uncertainty. I voted for a bill that will gradually raise reserves from 5 percent to 7 percent. It also increases capital reserve funds from 2 percent to 3 percent. Altogether, South Carolina will save 10 percent of revenue per year. This is another bill that will go to a conference committee for refining before being approved and sent to the Governor.

South Carolina is in the TOP six states who have planned & saved for a rainy-day. Source: 2022 The Pew Charitable Trust

Military Retirement Income Tax eliminated
The Workforce Enhancement and Military Recognition Act is a piece of legislation that I am very proud to be a part of. This bill eliminates state income taxes on retirement income for military personnel in South Carolina. I could not be more thankful for the veterans of our state and was pleased to see this legislation ratified on Thursday and then signed by the Governor.

Election Integrity Sent to the Governor’s Desk.
I recently reported how the Senate killed the House’s strong and bipartisan election reform bill that passed the House unanimously back in March. Being one of the most important and crucial pieces of legislation to go through our General Assembly this year, the House put the election reform language back in 8 more bills. This aimed to give the Senate 8 more chances to pass the important reforms to our election system. Finally, thanks to the work of House leadership and election reform champions, the Senate agreed to a bill which included much of the House’s election integrity language without a poison pill, and on Friday, Governor McMaster signed the bill into law. The bill is an overhaul of South Carolina’s current election system. The protections include: Increases identification requirements on mail-in ballots; Modifies reasons for mail-in absentee voting, Creates an ‘Early Voting’ system, which extends two weeks before an election for all qualified voters, Outlaws County Election Commissions from receiving funds from third-party groups like the ACLU or Facebook, Streamlines the election systems throughout the state so that a vote in York County is counted the same as a vote in Berkeley County, Allows random Election audits to be conducted of precincts and must be made public, Requires annual maintenance of the voter registration list using Bureau of Vital Statistics information, Cleans up voter rolls by requiring the DMV to provide the Election Commission with a list of non-residents, Increases voting machine security, requiring them to not have internet or wireless connection capability, Prevents ballot harvesting by limiting the number of absentee ballots a person can return to five.

Critical Race Theory Passes the House – again. One piece of legislation that we had to fight for again this week was a bill to outlaw Critical Race Theory indoctrination out of our classrooms and to give parents more insight into what their children are being taught. Unfortunately, our original House bill never made it out of the Senate, so our original language was incorporated into a different Senate Bill and sent back for approval.

School Choice: Education Scholarships: A conference committee was formed this week to finalize legislation that promises school choice to thousands of families in South Carolina who might not have had the resources to previously enjoy educational freedom. This legislation aims to provide scholarships to eligible students to put towards tuition, books, transportation, and other school expenses involved in attending the private school of their choice.

Save Women’s Sports On Tuesday, my colleagues and I approved the Senate’s tweaks to a bill that saves women’s sports. This bill requires student athletes to only compete in sports based on their biological gender. The bill will soon move across the desk of Governor McMaster, where I hope he will sign it into law.

Foster Care Reform – Approved. This week, Governor McMaster signed H.3509, which was championed by some of our foster children advocates in the House. This bill is an extension of foster care services, which will now go to support foster care youth until they reach 21 years of age, rather than 18. I am proud to be a supporter of this important legislation and glad to see the Senate and Governor McMaster support it too.

Thank you for allowing me to serve you in the South Carolina House of Representatives and please feel free to contact me via email at [email protected] or my 24-hour phone line at 803-331-8468.