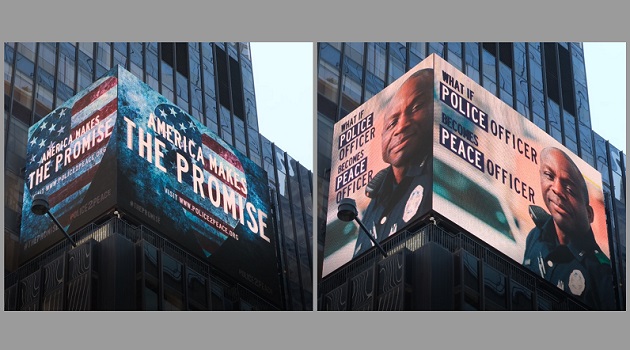 The Richland County Sheriff’s Dept. is the first of 200 agencies so far to make the pledge

Since RCSD’s promise, some 200 police departments and sheriff’s offices nationwide have made similar pledges all facilitated by POLICE2PEACE, the brainchild organization behind the peace officer promise.

Earlier this month, U.S. Congressional staffers were briefed by Lott and other nationally recognized law enforcement leaders about the importance of the pledge and the reasoning behind it. And on July 15, the Times Square ad began sending the message: “What if police officer, becomes peace officer … America makes the promise.”

The promise from each agency is made in various iterations, but all with the same general message. RCSD’s reads: “We, the members of the Richland County Sheriff’s Department, promise that while doing our best to prevent and mitigate crime and criminal activity, we will do everything in our power to do no harm to the communities we serve and protect. In point of fact, we see our responsibility as peace officers to befriend and bring a tangible sense of security and harmony to those whom we have sworn to serve and protect. In this, we promise, we will.”

The peace officer promise is said to be a reaffirmation of both the oaths taken by S.C. law enforcement officers and the specific oath for deputy sheriffs, a portion of which states: “[I] will conduct myself at all times with due consideration to all persons and will not be influenced in any matter on account of personal bias or prejudice. So help me, God.”