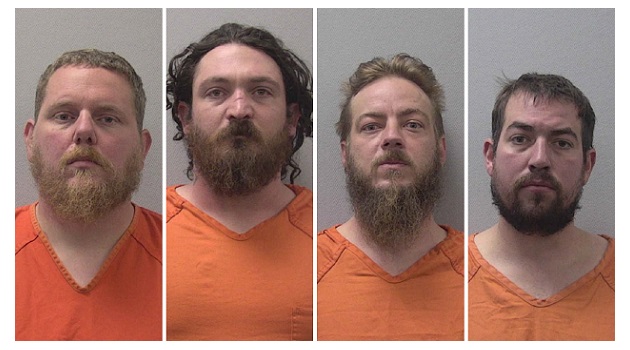 Four South Carolina men have been charged in a shooting on a Lexington County road last month that left a person dead.

Thirty-three-year-old Shane Andrzejewski of Lexington, 28-year-old Joshua Allen Dutton of Columbia, 38-year-old Casey Thomas Goodson of Chapin and 34-year-old William Douglas McGathen Simpson of Edgefield are each charged with one count of murder, one count of conspiracy and seven counts of attempted murder, according to arrest warrants.

“Based on the information and evidence investigators gathered in the aftermath of the shooting Oct. 8 on South Lake Drive at Interstate 20, these four men shot Timothy Brock multiple times as he was riding a motorcycle,” Lexington County Sheriff Jay Koon said. “The co-defendants approached him at a high rate of speed, fired shots and fled the scene.”

Interviews with shooting victims and security camera video were pivotal in identifying the suspects, according to Koon.

“Each of the suspects can be seen on security camera video in the area of the scene prior to the shooting,” Koon said. “The four suspects and Brock are from rival motorcycle groups.”

Deputies arrested the four suspects at different locations across the Midlands Tuesday morning, according to Koon.

The four suspects were transported to the Lexington County Detention Center where they are being held while they await a bond hearing.