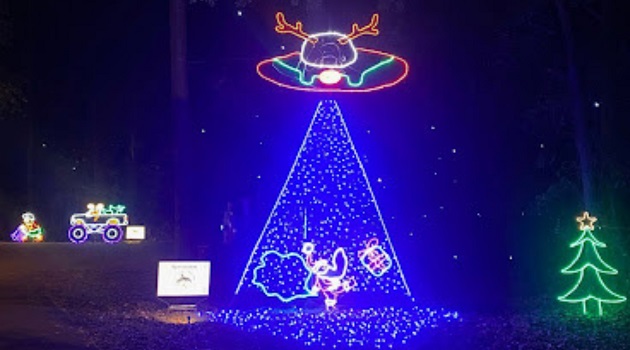 The Center for Advanced Technical Studies (The Center) partnered with the Irmo Chapin Recreation Commission to create a new display for the annual Holiday Lights on the River event at Saluda Shoals Park. This year’s display is a four-frame animated Santa beaming up into a UFO with a red nose and reindeer antlers. The finished display reaches over 20 feet high and is installed near the end of the show.

Students from four different programs at The Center collaborated to bring the project to life: Electrical Technology, Digital Art & Design, Welding Technology and Biosystems Engineering. The students were commissioned to conceptualize, design, create, and light the new display.

School District Five students Lily Cayton (Chapin High) in the Digital Art and Design program at The Center volunteered to design the light display and Jonah Bickley (Chapin High) served as the lead electrician for the project.

“My job as a designer is to take other people’s visions and make them happen,” Cayton said. “During a meeting with Saluda Shoals they expressed their desire for a “beaming up Santa” Christmas light. I took this idea and created a design in which Santa was beaming up into an alien spaceship and presented this idea along with a few others to Saluda Shoals.”

Once the design was finalized, the project shifted to the Welding program where students began cutting out metal mesh into the shapes for the design. The Electricity/Lighting team students then worked with the digital art and design class to get the lights on.

“I really enjoyed wrapping the lights to design the shapes that we had to make,” Bickley said. “When we put the frame up a few of the connections didn’t work the first time. Going back through and finding the little connections that didn’t work and getting them fixed was a really fun part of the project. Overall it was an excellent project to work on. I really felt like we made an excellent display and I was really glad that I got to work on this.”

In addition to creating the display, students from The Center joined Saluda Shoals staff for their decoration day on November 3, 2022 to install ground lighting around the displays.

The Center for Advanced Technical Studies in School District Five of Lexington and Richland Counties serves students in all four district high schools and provides career-focused, high wage and high tech academic programs and courses to prepare students to be college and career ready upon graduation.

The Center’s display with over 400 other animated displays beginning November 24, 2022 until December 31, 2022 during the Holiday Lights on the River event at Saluda Shoals Park. Visit https://www.icrc.net for more information.