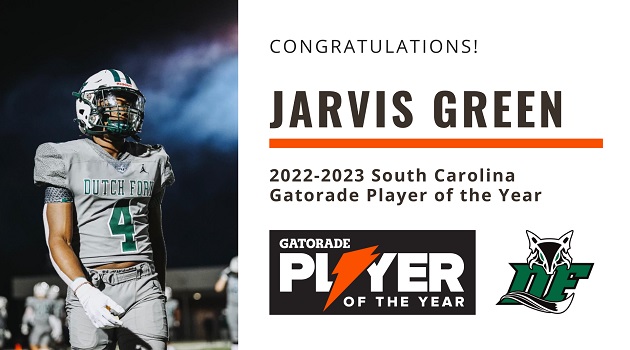 The award, which recognizes not only outstanding athletic excellence, but also high standards of academic achievement and exemplary character demonstrated on and off the field, distinguishes Green as South Carolina’s best high school football player. He will now be considered for the prestigious Gatorade National Football Player of the Year award to be announced in January.

“Jarvis has had an outstanding career at Dutch Fork High,” Coach Tom Knotts said. “This year was exceptional-he was the heart and soul of the 5A State Champion Silver Foxes. He was virtually unstoppable as a running back and was also the Foxes’ best receiver. His leadership and commitment were evident both on and off the field. He embodies the term student athlete. He is more than deserving of the Gatorade Player of the Year.”

The 5-foot-11, 195-pound senior running back led the Silver Foxes to a 14-1 record and the Class AAAAA state championship this past season. Green rushed for 2,272 yards and 33 touchdowns (TD) and also caught 36 passes for 527 yards and five scores. He scored 16 TDs in Dutch Fork High School’s five-game postseason run to the state title, including four TDs in the championship game.

Green has volunteered locally with the Adopt-a-Highway program and on behalf of the Special Olympics. As a member of Faithful Black Men of America, he has also donated his time as a mentor for at-risk youth.
Green has maintained a weighted 3.55 GPA in the classroom. Green signed to play football at Clemson University and will enroll in June.

For nearly 40 years, Gatorade has honored high school athletes at the top of their game as teammates, supporting their communities and achieving academic success. From CEOs and coaches to star athletes and community leaders, Gatorade Player of the Year winners showcase the power of sport.