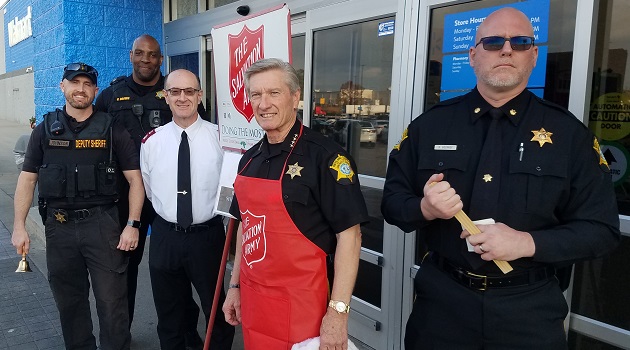 FOR THE SECOND YEAR IN A ROW, the Richland County Sheriff’s Department (RCSD) has broken the record for most money raised in central South Carolina by an organization on a single day at one location during the Salvation Army’s Red Kettle Campaign. The amount raised by RCSD on December 8, 2022 was $2,349. Last year’s record set by RCSD was $1,473. RCSD broke its 2021 record by $876, and Salvation Army officials say any single-day kettle amount over $500 is considered a “very good” day.

“That’s two records broken by RCSD this year,” says Major Mark Craddock, area (five-county region) commander of The Salvation Army. “Led by Sheriff Leon Lott, the department broke their own record from last year [which was the single-day record in the Midlands for 2021] and they again set the record for the Midlands in 2022. The Salvation Army is thankful to Sheriff Lott and his team for their willingness to ring the bell in support of our Red Kettle Campaign.”

Uniformed deputies – primarily members of RCSD’s command staff and Community Action Team – manned two doors at Walmart on Two Notch Road in northeast Columbia on Dec. 8, ringing the bells from 10:00 a.m. to 7:00 p.m. with Sheriff Lott himself ringing the bell and welcoming shoppers in the late afternoon.

“Ringing the bells for the Salvation Army is a time-honored tradition that my staff and I truly enjoy,” says Lott. “And for the past two years it has been interesting to see how many people stop to give at the kettle and spend a few minutes with us. We love talking with all the families, children, and the individuals who are out shopping and braving the Christmas rush. In terms of who gives; it seems nearly everyone gives.”

According to Craddock: “Every dollar collected will fuel critical services for individuals and families in need right here in the Midlands.”

The five counties served by the Salvation Army of the Midlands, include Richland, Lexington, Kershaw, Newberry, and Fairfield Counties.

Since 1906, community partners in the Midlands like RCSD have helped ring the bell to raise awareness and funds for The Salvation Army. One of many programs supported by Midlands-area kettle funds is the Christmas Angel Tree program, providing children with new toys and clothing. Kettle funds also support the Salvation Army’s social services department which provides for housing stability (preventing homelessness), meals served and food service for homeless shelters, as well as youth development, including summer camps and reading programs.