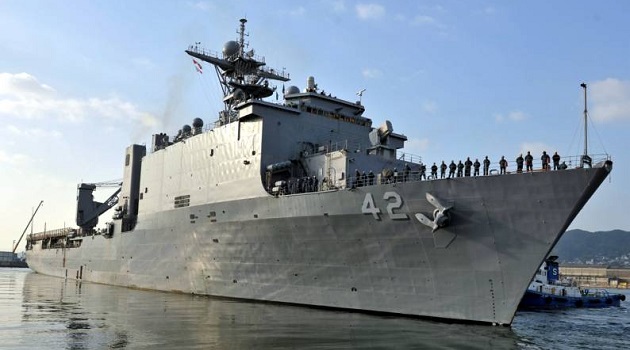 SASEBO, Japan – Ensign Matteo Macaluso, a native of Chapin, South Carolina, wanted to continue a proud family tradition of serving in the Navy. His grandfather also served in the Navy so he felt it was also his duty to serve.

Now, five years later and half a world away, Macaluso serves aboard one of the Navy’s most dependable amphibious ships at Fleet Activities Sasebo, patrolling one of the world’s busiest maritime regions as part of U.S. 7th Fleet.

“It’s incredibly busy day-to-day, but just the opportunity to work with the sailors everyday makes it worthwhile,” said Macaluso.

“I oversee the effective operation of damage control equipment, as well as, the repairs required to sustain habitability, water tight integrity and firefighting conditions,” said Macaluso.

Macaluso credits success in the Navy to many of the lessons learned in Chapin.

“My parents taught me selflessness and adaptability to change,” said Macaluso. “I’ve already moved twice since I’ve joined the Navy so I know what to do when unexpected situations arise.”

U.S. 7th Fleet spans more than 124 million square kilometers, stretching from the International Date Line to the India/Pakistan border; and from the Kuril Islands in the North to the Antarctic in the South. U.S. 7th Fleet’s area of operations encompasses 36 maritime countries and 50 percent of the world’s population with between 50-70 U.S. ships and submarines, 140 aircraft, and approximately 20,000 sailors.

“What’s different being deployed here is that you never stop long enough to realize that you are halfway around the world from your home, your friends and your amily,” said Macaluso.

“The Navy is forward-deployed to provide security and strengthen relationships in a free and open Indo-Pacific. It’s not just the ships and aircraft that have shown up to prevent conflict and promote peace,” said Vice Adm. Phil Sawyer, commander, U.S. 7th Fleet. “It is, and will continue to be our people who define the role our Navy plays around the world. People who’ve made a choice, and have the will and strength of character to make a difference.”

USS Germantown is 610 feet long. The ship can travel at speed in excess of 20 nautical miles per-hour. Germantown is one of eight Whidbey Island-class dock landing ships currently in service. The ship’s primary purpose is to launch equipment and personnel for amphibious missions.

Approximately 22 officers and 390 enlisted men and women make up the ship’s company. Their jobs are highly specialized and keep each part of the ship running smoothly. The jobs range from washing dishes and preparing meals to maintaining engines and handling weaponry.

Serving in the Navy means Macaluso is part of a world that is taking on new importance in America’s focus on rebuilding military readiness, strengthening alliances and reforming business practices in support of the National Defense Strategy.

“Our priorities center on people, capabilities and processes, and will be achieved by our focus on speed, value, results and partnerships,” said Secretary of the Navy Richard V. Spencer. “Readiness, lethality and modernization are the requirements driving these priorities.”

Though there are many ways for sailors to earn distinction in their command, community, and career, Macaluso is most proud of graduating from the United States Naval Academy.

As a member of one of the U.S. Navy’s most relied upon assets, Macaluso and other Sailors know they are part of a legacy that will last beyond their lifetimes contributing to the Navy the nation needs.

“It means everything to me to serve in the Navy,” said Macaluso. “It gives me the ability to give back to the country that has given me and my family so much. It’s also humbling to know that I get to lead the sons and daughters of America.”