By: John Griggs
In: Community News 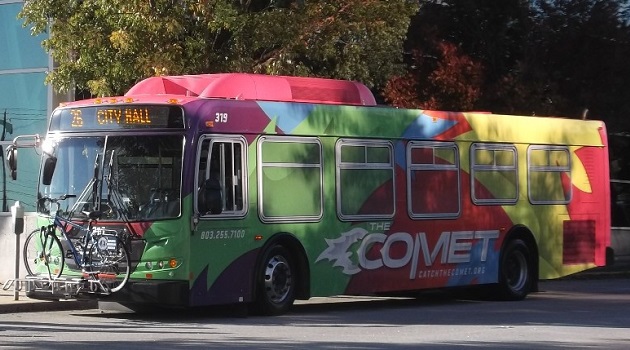 Ron Anderson, Chairman of The COMET Board of Directors, announced The COMET Board has voted to re-bid the Fixed Route and Paratransit Program Contract which is currently held by Transdev Services, Inc of Lombard, Illinois.

They are responsible for employing the drivers, performing the maintenance of the busses and other related services such as paratransit, security, landscaping, bus stop maintenance, mystery riding and IT which are provided by a series of local minority and women owned businesses.

The contract was initially awarded in February of 2015 to help the Comet ramp up its services to the Midlands after receiving additional resources from the Richland County transportation penny tax. Initially a five year contract, it allowed for five one-year extensions before it could be re-bid. Over the last five years, the current service provider Transdev has worked to increase services by 63 percent, increase the number of passengers by 35 percent and have added 350 stops in the Midlands along with more benches and shelters for our riders.

“Transdev has been a great partner to work with over the past five years,” said Chairman Ron Anderson. “Their expertise and support have helped advance public transportation in the Midlands and we certainly hope and expect Transdev will be one of the companies that bid on the new contract.”

Anderson has appointed a five member committee of the board to work with John Andoh, Executive Director/CEO and others to prepare the RFP. The goal is to have the RFP released by November 2019, have responses returned by December 2019 and to successfully identify a new contractor by February 2020.

“The Comet Board is excited about the advances the Comet is making across the region,” said Anderson. “We are looking forward to taking the next step in continuing to make mobility more accessible and convenient for everyone in the Midlands.”