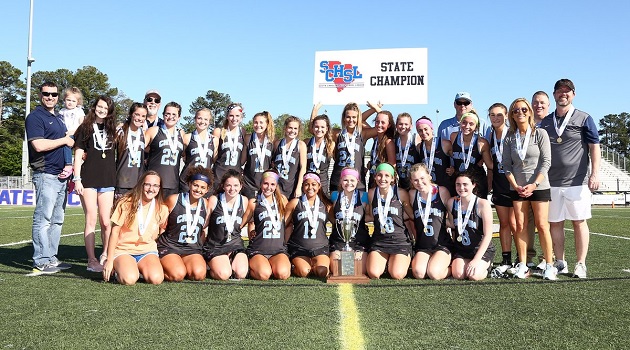 The third time was the charm for the Chapin High School girls’ lacrosse team who won the state lacrosse championship on April 27.

The Eagles took down Fort Mill, 9-6, to win the South Carolina High School League (SCHSL) Class 5A championship Saturday at Irmo High School.  This year was the first year the team competed in the Class 5A division.  The past two years they finished runner-up in the Class 4A division.

The team was undefeated, 16-0, going into the championship match and had a bit of a scare at halftime trailing Fort Mill 4-3.  The team rallied and pulled out the victory to bring home their first state lacrosse championship.

“This win was the culmination of years of hard work by the girls, coaching staff, parents and the community,” said Chapin High athletic director Ronnie Wessinger.  “I couldn’t be more pleased for this program. We started girls’ lacrosse at Chapin High about 7 years ago as a stand-alone team. To go from having to introduce every aspect of the sport to a state championship in that short of time is amazing.”

“The Eagle family is incredibly proud of Coach Green and our varsity girls’ lacrosse team,” said Chapin High School principal Michael Ames.  “To go undefeated and capture a state title is nothing short of remarkable.  Their years of hard work and dedication certainly paid off!”