Who murdered the hot sauce mogul?

By: John
In: Entertainment, Events 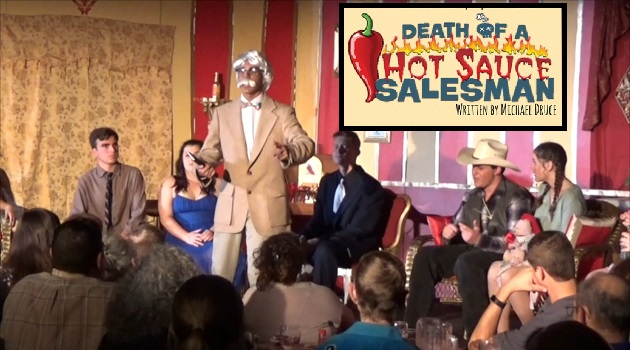 Tickets are now available for the Friends of the Irmo Branch Library’s presentation of “Death of a Hot Sauce Salesman,” a murder mystery dinner to be performed July 20, at The River Center at Saluda Shoals Park.

Prescott Knight, owner of the Hot Knights Genuine Pepper Sauce empire, discovers on the morning of the annual Knight Family Barbecue someone is trying to kill him. A family meeting is hastily arranged, and Prescott announces he is changing his will so that the recipe for Hot Knights will pass into the right hands. Hours later, family members find Prescott dead and the recipe stolen. Suspicion falls on everyone from Prescott’s family and his lawyer to the housekeeper and gardener. Guests will use their detective skills to help solve the murder of the hot sauce baron.

Attendees at this audience-participatory evening of fun, prizes and mystery will be entertained by local actors and other celebrities as the plot of the spicy comedy unfolds and you learn who murdered the hot sauce magnate. Special guest appearance again this year by Lexington County Public Library Director Kelly Poole.

This is the sixth year for the annual murder mystery dinner fundraiser.

“We’ve sold out each of the previous five murder mystery dinners, and we’re excited about the prospect of making it six straight,” said Friends of the Irmo Branch Library President Barbara Streeter. “Our goal is to improve on the previous year’s performance, and we believe we’ve hit a home run with Death of a Hot Sauce Salesman.”

The event includes a buffet meal, drink tickets, costume contest and door prizes. Grand prize to the amateur sleuth who solves the mystery. The evening starts at 6 pm and should end around 9 pm when the mystery is solved and the murderer revealed.

Tickets are $45 per person and can be purchased online at www.friendsoftheirmobranchlibrary.org or in person at the Irmo Branch Library at 6251 St. Andrews Road. Limited priority seating with a single purchase for a table of 8. The event is for those 18 or older.

There is an optional costume contest: 1950s Southern Gentry.

The Friends of the Irmo Branch Library is a 501c(3) non-profit that supports the library’s programming through financial assistance, volunteerism and community awareness.