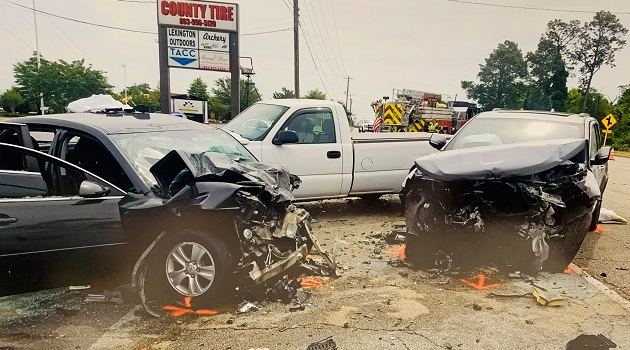 There were no plea negotiations in this case. Chief Administrative Judge Frank R. Addy, Jr, presided over this matter.

“This individual’s conscious decision to drive a motor vehicle while under the influence forever altered the life of Megan Diffee,” Eleventh Circuit Solicitor Rick Hubbard said. “Mrs. Diffee will never be the same person she was before this incident occurred, but we hope that this sentence has brought closure her and her family. Today’s sentence will hopefully prevent others from making such a poor choice to drive while impaired.”

On the morning of May 5, 2018, Megan Diffee, age 28 of Lexington, was traveling on US Highway 1 southbound toward Lexington when, about half of a mile before Interstate 20, Swearingen crossed the center median striking Diffee head on causing the rear of her vehicle to rise throwing Diffee forward shattering her legs. The vehicle behind Diffee collided with her vehicle as well. Diffee’s husband of eight years, Brandon, was traveling a few vehicles behind her and witnessed the head-on collision. Brandon ran to his wife’s vehicle and held her until first responders arrived after asking bystanders to call 911. A 911 caller reported to dispatch that the “driver was driving on the wrong side of the road” and “they just killed this person.” Witnesses believed she was dead or dying. Brandon was able to tell witnesses that “she’s alive” and that “she’s barely breathing.”

Several witnesses to the accident described to law enforcement Swearingen was traveling at a high rate of speed in the center median just prior to the collision. Diffee was traveling in the far right lane, commonly referred to as the slow lane. Diffee was transported to the trauma unit at Palmetto Health Richland due to her life threatening injuries. Swearingen was transported to Lexington Medical Center for treatment for his injuries.

South Carolina Highway Patrol responded to the scene and conducted the investigation of this case. Troopers went to both hospitals and described Diffee as appearing to be lifeless. Troopers described Swearingen to be disoriented with slurred speech and droopy eyes. At the hospital, a white powdery substance was found in Swearingen’s pocket that drug analysis would later confirm to be cocaine. Officers obtained a blood sample from Swearingen pursuant to a search warrant, which revealed that he was under the influence of Cocaine, Cocaine metabolite, THC, THC metabolites, and Alprazolam. With the physical evidence at the scene, along with the drugs found in Swearingen’s system, law enforcement was able to determine that Swearingen was solely responsible for the collision and under the influence at the time.

Diffee sustained severe injuries that will impact her and her family for the rest of her life. Diffee was in the ICU for 21 days. For approximately 17 days her arms and hands could not move. She then went to the Shepherd Center in Atlanta for inpatient physical therapy for 49 days followed by an additional 35 days of outpatient treatment.

Assistant Solicitor Todd Wagoner prosecuted this case for the Eleventh Circuit Solicitor’s Office. During sentencing, Assistant Solicitor Wagoner remarked to the Judge that while Swearingen pled guilty to great bodily injury “these are life-altering injuries.”

First Sergeant Ricky Martin with the South Carolina Highway Patrol addressed the Court during sentencing expressing that Swearingen “had a great opportunity to get his life together” referring to his prior reckless driving sentence just two months prior to this collision.

Diffee’s father, David Larson, also addressed the Court stating that his daughter’s courage “allows Megan to be here today and witness justice being done.” He further remarked that “life is full of moments, full of choices” and, while referring to Swearingen, that “his choice to repeatedly drive aggressively, his choice to drive impaired, … his choice to use a 5000 pound vehicle is no different than choosing to shoot into a crowd of people with an assault rifle.”

Brandon Diffee then addressed the Court describing vividly the images of his wife that day in the car “slumped over” that replay constantly in his mind. He further expressed that “every day I watch my beautiful, amazing wife struggle with everyday tasks that we take for granted” and “holds her during her panic attacks.”

Megan Diffee addressed the Court after Brandon sharing with the Judge she had run a half-marathon last year prior to that life-changing day in two-hours and fifteen minutes. She shared her running days were over. She then asked the Court for the maximum sentence, remarking Swearingen will receive “a sentence that will eventually come to an end, but mine never will.”

Swearingen has a prior 2016 drug conviction and reckless driving conviction from DUI Court in March of 2018. He also has an extensive driving record with multiple violations.