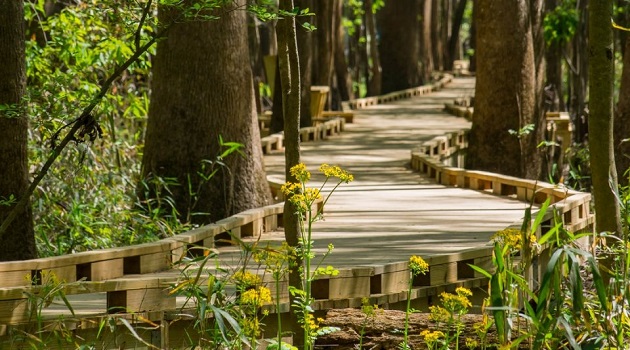 The National Park Foundation (NPF) announced more than 20 inaugural grants through its Women in Parks initiative, a program commemorating the centennial of the 19th amendment (which prohibited states from denying citizens the right to vote on the basis of sex) and recognizing the many sacrifices and contributions to the U.S. made by all women. These grants will fund projects highlighting women’s stories at national parks across the country. At Congaree National Park, the grant will support an all-women field crew to assist in upland forest restoration work. You can view a complete list of NPF-funded projects here.

For three weeks next spring, the all-women field crew, ages 18 – 35, will be working directly with Theresa Yednock, biological technician at Congaree NP. Over the last two decades, Theresa has worked tirelessly to help the park restore our upland longleaf pine ecosystem. She has also been a wildland firefighter and helped coordinate prescribed burns to promote longleaf regeneration. Theresa and the crew will be continuing these ongoing efforts. The field crew will also have mentoring sessions with several of the women employees at the park who have made a career in working with the National Park Service, including park superintendent K. Lynn Berry. “A park service biologist in the 21st century and a women’s suffrage activist from the 19th or 20th have more in common than one might think,” said Berry. “This grant helps us highlight the throughline: women who have accomplished meaningful change in the world are focused, tenacious and persevering. The women who join our field crew next spring will be a part of a decades-long story of conservation here at the park. We know our upland forests will be better because of the contributions they make, and we hope they will feel proud to be a part of that sustained, ongoing, important work.”

“The National Park Service offers unique opportunities to learn about women’s important contributions and how even their silent and diverse everyday lives formed the foundations of America,” said National Park Service Chief Historian Dr. Turkiya Lowe. “Parks are spaces to ask complex questions about the history of the United States.’”

The Women in Parks grants support a range of projects that will highlight the contributions women have made to our country and the role they continue to play in our ever-evolving narrative.

“Every park has a connection to women that can inspire current and future generations,” said NPF President and CEO Will Shafroth. “The National Park Foundation and our donors, who played a key role in inspiring the launch of our Women in Parks initiative last year, are thrilled to make stories about women’s contributions to our country, past and present, accessible to all people through parks and online.”

NPF’s Women in Parks initiative is inspired by the National Park Service’s commemoration for the 100th anniversary of the ratification of the 19th Amendment and the bipartisan Women’s Suffrage Centennial Commission (S.847). Launched in June 2019, Women in Parks is part of the NPF’s ongoing efforts to help expand the stories and perspectives shared through national parks. The initiative will continue throughout 2020 and beyond.

From local philanthropic organizations and friends groups, to community-based organizations, national park and program partners are key collaborators in preserving women’s history and making it accessible to all people. In addition, just like the parks themselves, every partner group has a connection to women.

Individuals, foundations, and companies can support the National Park Foundation’s efforts to ensure that women’s history in the United States is shared, preserved, and leveraged to inspire current and future generations by visiting the NPF website.