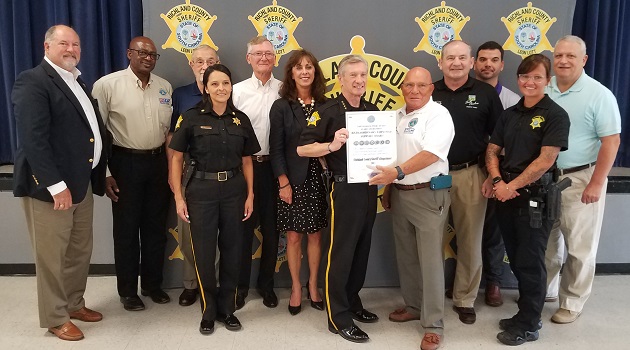 “This ESGR award is an honor to be shared with every single employee of the Richland County Sheriff’s Department,” said Lott. “And it’s another first for our state.”

An ESGR volunteer and the executive director of the SCDMV, Shwedo pointed to Lott’s service both as president of the Association of the U.S. Army’s (AUSA) Fort Jackson-Palmetto State chapter and his command of the all-volunteer S.C. State Guard as symbolic representations of his tirelessness and strong leadership which carry over to command culture at RCSD and throughout the department.

As pres. of AUSA’s Palmetto State chapter, Lott is “at the fort once a month taking care of soldiers that are serving at Fort Jackson and around the Army,” said Shwedo, who also serves as Civilian Aide to the Secretary of the Army for S.C. “He has that reputation. The president [of AUSA], a four-star general by the name of Carter Hamm, talks about Sheriff Lott every place he goes to represent the Association.”

Shwedo added, “If you want to know why RCSD is getting the award, it’s because you [RCSD deputies and employees] are able to do everything at the pinnacle of success. And I couldn’t be prouder to be a part of the presentation and to thank Sheriff Lott and all of the men and women in this room for everything you do for our Guard and Reserve, the state, and the country.”

ESGR Chair Emeritus Eli Wishart, a former two-star commander of the S.C. State Guard and retired U.S. Army Special Forces colonel, said, “As the boss goes, so goes the unit; and that is precisely what we see with Sheriff Lott and RCSD.”

Susan McPherson, director of Public Policy and Military Affairs at the Columbia Chamber, agrees. “A champion for the military community through their participation, hiring and support while officers are away serving their country, Sheriff Lott and his officers are more than deserving of this prestigious honor,” said McPherson. “It is entirely fitting for RCSD, under the leadership of Sheriff Lott, to receive the first-ever Extraordinary Employer Support Award in S.C.”

Tom Yeoman, first vice commander of American Legion Post 193, said of Yturria’s and Merriman’s awards: “I am proud of RCSD and of these two officers, both of whom are very deserving outstanding law enforcement professionals.”

Yturria’s Outstanding Law Enforcement Officer of the Year award was her second from Post 193. She received the same award in 2013, the same year coincidentally that RCSD received the Secretary of Defense Employer Support Freedom Award.

Merriman, RCSD’s Deputy of the Year 2020, received the American Legion’s state award for bravery on May 28. She received RCSD’s Medal of Valor in January.

2021-07-27
Previous Post: Become a Part of the Magic at the Newberry Opera House
Next Post: Rogers receives Order of the Palmetto