Sheriff Lott and RCSD pledge to “do no harm” 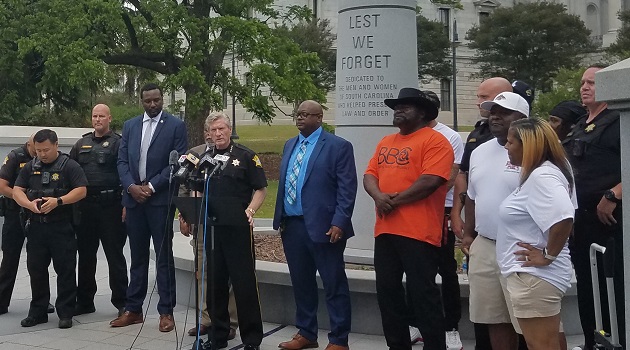 Richland County Sheriff Leon Lott and the Richland County Sheriff’s Department (RCSD) publicly pledged “to do no harm” to the communities they serve during a press conference held at the Law Enforcement Memorial on the grounds of the South Carolina State House in Columbia, Tuesday, May 3.

The promise, as read by Sheriff Lott, states: “We, the members of the Richland County Sheriff’s Department, promise that while doing our best to prevent and mitigate crime and criminal activity, we will do everything in our power to do no harm to the communities we serve and protect. In point of fact, we see our responsibility as peace officers to befriend and bring a tangible sense of security and harmony to those whom we have sworn to serve and protect. In this, we promise, we will.”

The peace officer promise is said to be a reaffirmation of both the oaths taken by S.C. law enforcement officers and the specific oath for deputy sheriffs, a portion of which states: “[I] will conduct myself at all times with due consideration to all persons and will not be influenced in any matter on account of personal bias or prejudice. So help me, God.”

Reaffirmation is key, says Perry Bradley, a community activist and founding director of Building Better Communities, who added the new promise is a “wonderful step forward,” but the communities themselves have something of a responsibility as well.

“In a marriage, for instance, a husband and wife may assume they love each other, but sometimes the simple declaration, I love you, is needed,” said Bradley. “Words matter. It’s not that the police were or have been doing wrong necessarily, but there does come a point in a relationship – particularly in the tumultuous climate in which we today find ourselves in the wake of the death of George Floyd and with calls from some quarters to defund the police – where we simply can’t take things for granted.”

Bradley added: “Sheriff Lott recognizes this, and that’s why he has taken the lead in making this pledge which is already gaining momentum across the country.”

Lott and his department were the first to make the promise, nationwide.

“The Peace Officer Promise offers policing and communities yet another opportunity to repair strained police-community relationships,” said Lisa Broderick, executive director of Police2Peace, the brainchild organization behind the peace officer promise. “One way the promise does this is by encouraging both the police and the communities they serve to co-produce public safety. Co-producing public safety means the community and police both have a voice in defining what they want their policing to look like.”

Broderick added: “Simply put, the peace officer promise is a national police-community engagement approach where agencies are building trust and confidence by reaffirming to their communities their dedication to protect and serve.”

The promise is not the only national peace officer initiative in which RCSD have been the lead agency, nationwide. In 2018, RCSD took part in a still-ongoing academic study (aimed at determining the impact of words and public perception) by branding all of its marked vehicles with the words PEACE OFFICER. In 2020, the department retrofitted approximately 500 deputy uniforms (both shirts and ballistic vests) with the words PEACE OFFICER stitched below the already existing words, DEPUTY SHERIFF.

In all three instances – the vehicles, the uniforms, and now the promise – Lott stated that by identifying his deputies as PEACE OFFICERS his department was demonstrating to the public and the communities within its jurisdiction that “our deputies are and will be a reassuring presence regardless of the situation. Yes, we enforce the law: Sometimes we are guardians, sometimes we are warriors, but the majority of the time we are peace officers.”

In an interesting twist to a State House press conference, barbeque sandwiches were served by Big Bull’s Bang’n BBQ and Southern Comfort Food in northeast Columbia.